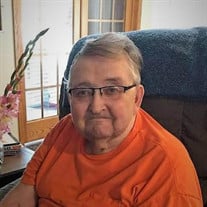 William “Bill” Peter Settergren, age 76, of Hutchinson formerly of Darwin, died Tuesday, December 15, 2020, at Prairie Senior Cottages in Hutchinson. A funeral service will be held on Saturday, December 19, 2020, at 11:00 a.m. at Peace Lutheran Church in Hutchinson with Rev. Layton Lemke officiating. The interment will be held at Peace Lutheran Church in Hutchinson following the service. There will be a two-hour visitation on Saturday Morning at Peace Lutheran Church in Hutchinson. In lieu of Flowers donations are preferred to be given to the Alzheimer’s Association or Alcoholics Anonymous. The Johnson Funeral Home in Dassel is in charge of the funeral arrangements. For those who wish to attend the funeral service, we are asking everyone to wear a mask and use social distancing. William “Bill” Peter Settergren, the son of Walter and Inez (Forsberg) Settergren, was born on December 29, 1943, in Hutchinson, Minnesota. William grew up in the Darwin area where he was a graduate of the Dassel High School class of 1961. He had been active in the FFA and lettered as a member of the Dassel High School Football Team. William was baptized on June 2, 1966, and confirmed on June 5, 1966, at Peace Lutheran Church in Hutchinson. He was a member of Peace Lutheran Church in Hutchinson at the time of his death. On February 5, 1965, William was united in marriage to Sylvia Adeline Radunz in Watertown, South Dakota. This marriage was blessed with four sons. Together they made their home in Hutchinson where William was employed as a roofer by Marty’s Roofing. In 1980 they moved to his family farm near Darwin. Bill loved to spend time hunting deer, pheasants, duck, and geese. He enjoyed playing cards, especially pinochle and going to casinos. He could often be found spending time weeding and taking care of his Garden. He had been an active member of 4-H when he was growing up. Holidays and special events were important to him when he could get together with his family. Bill is survived by his sons, Kevin Settergren (special friend, Darcy) of Litchfield, Ken (Carman) Settergren of Litchfield, Richard (Jean) Settergren of Hutchinson and James Settergren of Litchfield, Ten grandchildren, Sara Settergren, Rachel Settergren, Nikkita Settergren, Anthony Settergren, Skyler Settergren, Hailey Settergren, Sasha Settergren, Jeramy Settergren, Eric (Niki) Settergren, and Ashley (Britt) Iverson, six great grandchildren, Gunnar Iverson, Averie Iverson, Noah Nussbaum, Natalie Settergren, Kadence Settergren and Mikila Rech, siblings, Elna (Dennis) McCutchen of Hutchinson, and Kathy Koenig of Missoula, Montana; aunt, Doris Christensen of Bloomington, aunt, Stella Forsberg of California, sister-in-law, Betty Settergren of Norwood Young America, sister-in-law, Suzanne (Roy) Mackedanz of Litchfield. He is also survived by several nieces, nephews, and other relatives. Bill was preceded in death by his wife, Sylvia on April 6, 2019, his parents, Walter and Inez Settergren, brother, Wayne Settergren, mother and father-in-law, Ferdinand and Esther Radunz, and a brother-in-law, Lee Koenig.

The family of William "Bill" Peter Settergren created this Life Tributes page to make it easy to share your memories.