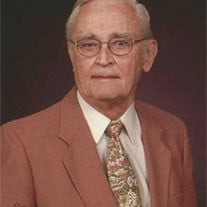 K. Wesley Olson 2/10/1930 - 8/28/2017 Retired Covenant pastor, K. Wesley Olson, 87, died Monday, August 28, 2017 at home in Grand Rapids, MN. Peace to his memory. "Well done, good and faithful servant!" Karl Wesley Olson was the youngest child of John Arthur (Art) and Mabel Anderson Olson, born on February 10, 1930 in the dining room of the Olson family farm in Bird Island, Minnesota. Initially named "Gerald," he joined brother, John Roger (Marie) Olson, and sisters, Deloris Ruth Marie and Carrol Frances Louise. His arrival into this world had a profound effect on his family and triggered serious thoughts about their relationship to the Lord and involvement in the life of the church. Throughout a grueling labor and breach home delivery perilous enough to seriously threaten the life of his mother, and certainly meant the death of the child, the family turned to prayer, imploring the Lord to save them both. They were convinced that God, the Almighty One, heard their cry, because not only did Mabel make it through - and lived to the ripe old age of 88 with amazing health and strength - but "Baby Gerald" did as well! In response to their answered prayers, his family committed him to the Lord in holy baptism on April 10, 1930 at the Methodist church in Bird Island, MN and changed his name to "Karl Wesley," a name they deemed worthy of a preacher --- a fact that he was not made aware of until after his decision to enter the ministry. One Sunday when he was about 7 years old, the family visited the Palmyra Covenant Church – and they never left. They became involved in the life of this small country church immediately. Wesley graduated from Bird Island Public High School at the age of 16. He attended North Park Junior College in Chicago, IL as a pre-seminary student from 1947-1949, followed by North Park Theological Seminary from 1949-1954, Northern Illinois University in DeKalb, IL from 1956-1957, the University of Minnesota from 1959-1961, and Luther Seminary in St. Paul, MN from 1963-1967. He was ordained by the Evangelical Covenant Church in 1956. He served as intern pastor at First Covenant Church in Duluth, MN and Barrett-Ben Wade Covenant churches in Barrett, MN. He served as pastor at the Evangelical Covenant Church in Elgin, IL from 1952-1958, Roseville Covenant Church in St. Paul, MN from 1958-1967, Salem Covenant Church in New Brighton, MN from 1967-1979, and the Evangelical Covenant Church in Mankato, MN from 1979-1986. He served as Midwest Conference superintendent in Omaha, NE from 1986-1995. Following his retirement in 1995, he and his wife, Harriet, headed north once again to live in a home on Lake Washington just outside of Dassel, MN. He liked to tell people that a retired pastor should most certainly live where he could walk on water 3 months out of the year! Also during his retirement, he served as interim pastor at congregations in Minnesota and Colorado. He met his future wife, Harriet Louise Settergren of Dassel, MN, while attending North Park Junior College in 1947. They were married in June 1951 and blessed with four children: Lynda (Jason) Olson-Lee, DiAnn (Thomas) Bloomquist, Kent (Debra) Olson, and Brenda (Gary) Redding. Their family grew with the births of 9 grandchildren and 9 great-grandchildren. He is survived by his wife, daughters, 9 grandchildren: Kristopher, Emily (Dusty), Brianna (Nate), Hannah (Troy), Chelsea (Aaron), Joshua, Mikayla, Samuel, and Grace; and 9 great-grandchildren: TJ, Preston, Leila, Wyatt, Rorie, Dahliah, Jacob, Peyton, and Katreyus; as well as sister-in-law, Marie Olson, nephews John Gary (Carolyn) Olson and Mark (Pam) Olson, and nieces Sandy (Alan) Freeman and Meridee Miller. He was preceded in death by his parents, siblings, and son, Kent Wesley Olson. Wesley was an avid reader, a lover of history and travel. He enjoyed the outdoors, especially fishing, and was a meticulous gardener. He loved all sports, but was particularly fond of his Minnesota sports teams: the Vikings, the Twins, and Gopher basketball and thoroughly enjoyed watching and discussing sports with his son and sons-in-law. Above all else, he thoroughly enjoyed spending as much time as possible with family and friends. He was particularly known for his fierce Rook playing with his brother and nephews - and whoever else they could convince to play with them! On being a grandfather, he would quip, "If I had known grandchildren were so much fun, I would have had them first!" His grandchildren remember him as always being up for fun, whether it was taking them for boat rides or tubing behind the pontoon in summer, shoveling a skating rink for them on the lake or firing up the sauna in the winter, playing card games and foosball, teaching and sharing his love of Rook, bowls of popcorn, ice cream, or for those few who developed a taste for it: black licorice. He was kind, wise, intelligent, and good at making informed decisions. Most of all, however, Wesley LOVED JESUS, which predominantly revealed itself in his love of PEOPLE. He was strong, faithful, and present in all aspects of his life. His interest in others' lives was unparalleled, and continued throughout his life, even while dealing with the ravages of Parkinson's disease on his own body. Visitations will be held 4-7pm on Saturday, September 9 and 1pm on Sunday, September 10, followed by A Celebration of Life service at 2pm. Services will be held at the Dassel Covenant Church, 251 Lake Street, Dassel, MN. Interment will be at Lake Jennie Covenant Church following the service. "Looking to JESUS the pioneer and perfecter of our faith, who for the joy that was set before him endured the cross, despising the shame, and is seated at the right hand of the throne of God." Hebrews 12:2 (RSV)

The family of Rev. K Wesley Olson created this Life Tributes page to make it easy to share your memories.