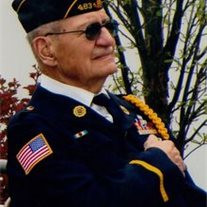 Wallace Franklin Compton, age 93, of South Haven, died Tuesday, March 4, 2014, at the Augustana Lakeside Health Care Center of Dassel. A memorial service will be held on Monday, March 10, 2014, at 2:00 P.M. at the Evangelical Covenant Church in Dassel with the Rev. Keith Carlson officiating. Interment will be held at the Fort Snelling National Cemetery in Minneapolis on a later date. A time to gather with the family will be held on Sunday evening, March 9, 2014, from 4:00 p.m. to 6:00 p.m. and one hour prior to the service on Monday at the Evangelical Covenant Church in Dassel. The Johnson Funeral Home in Dassel is in charge of the memorial arrangements. Wallace Franklin Compton, was born on December 24, 1920, in Dassel, Minnesota, the son of Edmund and Esther (Russell) Compton. He attended school and grew up in the Dassel area. Wallace was a member of the Evangelical Covenant Church at the time of his death. He served his country in the United States Navy during World War II and later during the Korean Conflict. He was a dedicated member of the Johnson-Kelly American Legion Post 483 in Kingston and a lifetime member of the VFW Admiral Benson Post 2818 in Litchfield. On June 7, 1972, Wallace was united in marriage to Judith Timm. Together they made their home in Minneapolis and later the South Haven area. He was employed as a carpenter and worked in Minneapolis area. He helped as a volunteer coordinator for the 1999 addition at the Evangelical Covenant Church. He enjoyed gunsmithing, target shooting, hunting, fishing, spending time with his wife Judy taking vacations. He is survived by his wife, Judy, one daughter from a previous marriage, Kimberly (Ernest) Jackson of Brooklyn Park, Minnesota, step children, Janise (Mike) Matzke of Bethel, Minnesota, Gail (Jay) Lair of Savage, and Gordon (Evelia) Timm of Brooklyn Park, eight grandchildren, and four great grandchildren, siblings, Betty Johnson of Howard Lake, Sadie (Lowell) Gillman of Cokato, and Esther Klima of Cokato. He is also survived by numerous nieces and nephews. He was preceded in death by his parents, siblings, Alice Compton, Edward Compton, Mildred Carlen, Hazel Dallmann, and Robert Compton.

The family of Wallace Franklin Compton created this Life Tributes page to make it easy to share your memories.

Send flowers to the Compton family.