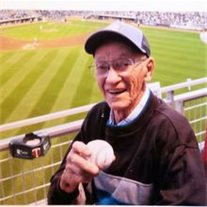 Waldon Vincent Newstrom, age 96, of Dassel, died Friday, March 23, 2018, at the Augustana Lakeside Health Care Center in Dassel. A memorial service will be held at 11:00 a.m. on Saturday, April 7, 2018, at the Gethsemane Lutheran Church in Dassel with the Rev. Laurie O'Shea officiating. The interment of the urn will take place later during the spring at the Steelesville Cemetery in rural Dassel. There will be a one-hour time to gather with the family at the Gethsemane Lutheran Church in Dassel prior to the service. The Johnson Funeral Home of Dassel is in charge of the memorial arrangements. Waldon (Wally), the son of John August and Beda (Liden) Newstrom, was born on May 23, 1921, in New London, Minnesota. He grew up in the New London area where he helped with the family farm. He was baptized and later confirmed at the Lebanon Lutheran Church in New London. He was presently a member of the Gethsemane Lutheran Church in Dassel. He had served on the Gethsemane Church Board and had been an active member of the men's fellowship bible study. Wally was employed for several years at the New London Creamery as a butter maker and eventually became the Creamery Manager. On July 5, 1947, he was united in marriage to Arlene Nelson in Belgrade, Minnesota. They had recently celebrated 70 years of marriage. Together they made their home in New London until 1965, when Wally took a new job in Dassel and they moved there. They spent 18 years wintering at Lake Havasu, Arizona. For 20 years Wally was employed at Faribault Foods in Cokato during the summer nights as a Boiler Operator and retired at the age of 85. Wally loved camping and traveling, including to the state of Washington many times and to see his sisters in California. He and Arlene made two visits to Hawaii with their good friends. He enjoyed his family and was most proud of his daughters, grandchildren and great grandchildren. He was known for his clean and orderly creamery throughout the state and was awarded many times for his exceptional butter. He loved Louis L'Amour novels, the mountains, reading history books, especially on the topic of WWII and the Civil War, both which he was very knowledgeable on. Wally could often be seen soaking up the sunshine that he loved so much. He served on the Dassel City Council and was also active in the Creamery Association. He also enjoyed playing games and cards with his family and his card club. He is survived by his wife Arlene Newstrom of Dassel, daughters, Cindy (David) Olson of Minnetrista, Lori (Paul) Lundgren of Minneapolis, and Linda (Jim) Maguire of Spokane, Washington, grandchildren Ryan, Brenden, Kali, Kelsey and JT, 7 great grandchildren, Astrid, Robbie, Jonny, Lily, Landon, James, Gabriel, and many nieces and nephews. He was preceded in death by his parents, John and Beda Newstrom, his siblings, Florence Newstrom Lovgren, Viola Jafek, Ethel Gaylord, Gladys Olson, Gervaise Pollex, Doris Stenstrom, Lavonne Studer, Clarence Newstrom and by a cousin, Wallace Newstrom, who was taken in and raised as a brother.

Waldon Vincent Newstrom, age 96, of Dassel, died Friday, March 23, 2018, at the Augustana Lakeside Health Care Center in Dassel. A memorial service will be held at 11:00 a.m. on Saturday, April 7, 2018, at the Gethsemane Lutheran Church in Dassel... View Obituary & Service Information

The family of Waldon Vincent Newstrom created this Life Tributes page to make it easy to share your memories.

Send flowers to the Newstrom family.