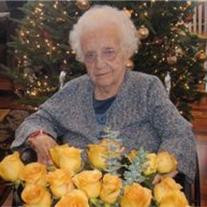 Vivian (Nystrom) Bengtson, age 101, of Dassel, died Friday, July 6th, 2012, at the Augustana Lakeside Health Care Center of Dassel. A Memorial Celebration of Vivian's life will be held on Saturday, July 21, 2012 at 2 p.m. from the Evangelical Covenant Church in Dassel. Rev. Keith Carlson will officiate. A time to gather with the Bengtson family will be 1 hour prior to the service at the church. Vivian (Nystrom) Bengtson was born in Dassel, Minnesota on December 7, 1910 to Ole and Ida (Johnson) Nystrom. Ole was a shoemaker and his shop was a part of Dassel's vibrant downtown scene in the 1920's and 30's. Ida ran a boarding house, so even though Vivian was an only child, she was never lonely, because country cousins boarded there Monday through Friday in order to attend Dassel High School. Vivian graduated from Dassel High School in 1929 and then attended Calhoun Secretarial School in Minneapolis. Following that she worked at the State Bank of Cokato during the 1930's. She was a lifetime member of the Dassel Covenant Church where she was baptized and confirmed. In 1934 she was united in marriage to Arvid Bengtson in Dubuque, Iowa by Arvid's pastoral brothers, Rev. John and Rev. Bethel Bengtson. Vivian and Arvid moved to a farm one mile south of Dassel in the early 1940s where they raised their children. In 1962 they moved back into the village of Dassel. In 1997 Vivian moved into Dassel Lakeside Apartments to be near Arvid who was then in the attached nursing home. She was an active volunteer at the Dassel Lakeside Nursing Home for many years and was a member of Covenant Women into her 80s. She was a talented ceramic artist and shared her products with family and friends. Arvid died on February 25, 1998, and Vivian moved into the Dassel Lakeside Nursing Home in February, 2004. She is survived by her children, Mary Jo Kjell (David), Gloria Haapala (David) and John Bengtson (Clarice), seven grandchildren, Deb Tanner, David, Tim, John and Paul Bengtson, Steve Kjell and Erik Haapala, twelve great grandchildren, and many other beloved family members.

Vivian (Nystrom) Bengtson, age 101, of Dassel, died Friday, July 6th, 2012, at the Augustana Lakeside Health Care Center of Dassel. A Memorial Celebration of Vivian's life will be held on Saturday, July 21, 2012 at 2 p.m. from the Evangelical... View Obituary & Service Information

The family of Vivian Bengtson created this Life Tributes page to make it easy to share your memories.