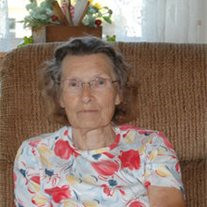 Virginia (Perkins) Crayford, age 91, of Wadena, formerly of Dassel, died Thursday, March 19, 2015, at her son's home in Wadena. A private family service will be held on Monday, March 23, 2015, at the Johnson Funeral Home in Dassel with the Rev. Ralph Erickson officiating. The interment will be held at the Dassel Community Cemetery. Virginia (Perkins) Crayford, the daughter of Reynold and Emily (Taylor) Perkins, was born on September 13, 1923, in Seville, Ohio. She grew up in Seville and attended Sharon High School, class of 1941, Medina County School District. After graduating from high school Virginia attended nursing school in Toledo, Ohio, where she graduated with a License Practical Nursing degree. In July of 1945, Virginia was united in marriage to Frederick Crayford in Toledo, Ohio. Together they made their home in Chippewa Lake, Ohio, where Virginia was a homemaker and also employed as a nurse. In 1960, Virginia and her son's moved to Dassel, Minnesota and resided south of Lake Washington until 1963, when they moved into Dassel. Virginia worked at the Hutchinson Hospital before being employed by 3M in Hutchinson for 26 years, retiring in 1986. First and foremost, she loved her Lord and Savior. Virginia loved to read, especially her bible. She enjoyed vegetable gardening, canning, crossword puzzles, and playing games with her children and grandchildren. (She was very competitive). She is survived by her four sons, John (Sandy) Crayford of Dassel; Mark and (Mary) Crayford of Dassel; Matthew (Debbie) Crayford of Anoka; and Jim (Roxanne) Crayford of Wadena, nine grandchildren, Jason Crayford, Christopher Crayford, Jeremy Crayford, Cora Mustin, Michael Crayford, James Crayford Jr., Jennifer Sundheim, Benjamin Crayford, and Craig Crayford, twelve great grandchildren and one great great grandchild, one sister, Dorothy Mattias of Grand Rapids, Michigan, along with several nieces and nephews. She was preceded in death by her husband, her parents, two brothers, Walter Perkins, and Ralph Perkins, two sisters, Ruth Leatherman and Clara "Fannie" Pankake.

Virginia (Perkins) Crayford, age 91, of Wadena, formerly of Dassel, died Thursday, March 19, 2015, at her son's home in Wadena. A private family service will be held on Monday, March 23, 2015, at the Johnson Funeral Home in Dassel with the Rev.... View Obituary & Service Information

The family of Virginia Crayford created this Life Tributes page to make it easy to share your memories.

Send flowers to the Crayford family.