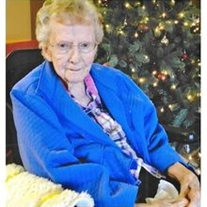 Vernice Olson, age 99, of Cokato, died Saturday, January 27, 2018, at the Cokato Manor. A funeral service will be held on Wednesday, January 31, 2018, at 11:00 a.m. at the Gethsemane Lutheran Church in Dassel with the Rev. Laurie O'Shea and Rev. John Peterson officiating. The interment will be held at the Swan Lake Cemetery following the service. There will be a one-hour visitation prior to the service on Wednesday morning at the Gethsemane Lutheran Church in Dassel. Memorials are requested to be given to the Swan Lake Cemetery Fund. Vernice (Nelson) Olson was born on March 24, 1918, in Litchfield, Minnesota to her proud parents, Adolph and Anna (Johnson) Nelson of Litchfield. Vernice was a devoted wife, mother, grandma, great grandma and Sunday school teacher. Vernice was confirmed on June 12, 1932, at First Lutheran Church in Litchfield. Vernice attended and graduated from the Litchfield High School. After high school, Vernice took care of children until she married Herman Olson on May 25, 1940, in Milaca, Minnesota. Her marriage was blessed with two children, James Olson and Carol Ann (Olson) Lee. They spent 32 years together living north of Dassel on the farm. Herman passed away in 1972. After Herman's death, Vernice moved to Darwin and lived in town. She worked many years at Hansen Hardware in Darwin and became very close to the Hansen children. She then worked at Crest Electronics until the age of 72, when she retired. While working at Crest Electronics is where she met her "adopted" daughter Marg Holm. Vernice was a devoted member of Swan Lake Lutheran Church, where she was a Sunday School teacher and spent many hours in the kitchen. In her free time, she was always baking cookies, donuts, and hosting "Birthday Club". She was very proud to live in Darwin and was always talking about the Biggest Ball of Twine. Vernice was a devoted Christian who read her bible and daily devotions. She loved teaching Sunday School. She also enjoyed watching the Minnesota Twins, playing Bingo and cards. Vernice is survived by her son, James (Mavis) Olson of Atwater, Carol (Galen) Lee of Cokato, five granddaughters, Dr. Kim Olson and Kenny Housman of Atwater, Lyn (Richard) Voigt of Grove City, Carrie (Myron) Klinkner of Loretto, Katie Olson of Atwater, Laurie (Brandon) Johnson of Sartell, five great grandchildren, Delton Voigt, John and Sarah Klinkner, and Emma and Lindsey Johnson. Vernice was preceded in death by her husband, Herman Olson, her parents, three siblings, Vernon Nelson, John Nelson and Adele Johnson.

Vernice Olson, age 99, of Cokato, died Saturday, January 27, 2018, at the Cokato Manor. A funeral service will be held on Wednesday, January 31, 2018, at 11:00 a.m. at the Gethsemane Lutheran Church in Dassel with the Rev. Laurie O'Shea and... View Obituary & Service Information

The family of Vernice Olson created this Life Tributes page to make it easy to share your memories.

Send flowers to the Olson family.