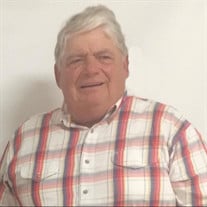 Thomas Lynn Johnson, age 70, of Buffalo, formerly of Dassel, died Sunday, May 26, 2019, at his farm near Cokato. A funeral service will be held on Saturday, June 1, 2019, at 1:00 p.m. at the Gethsemane Lutheran Church in Dassel with Rev. Laurie O’Shea officiating. There will be a visitation on Friday, May 31, 2019, from 5:00 p.m. to 7:00 p.m. at the Johnson Funeral Home in Dassel. There will be a one-hour visitation prior to the service on Saturday at the Gethsemane Lutheran Church in Dassel. Thomas Lynn Johnson, the son of Richard and Kathryn (Kildaw) Johnson was born on March 15, 1949, in Litchfield, Minnesota. Thomas grew up in the Dassel area where he was baptized and confirmed at the First Lutheran Church in Dassel. Thomas graduated from Dassel High School in 1967, he then proceeded to attend Willmar Technical College before completing his education at Mankato State University with a degree in Civil Engineering. Thomas had a very successful, professional career, that started at Meeker County Parks. Tom held other positions with various county parks before he started his career as a highway engineer working for the Minnesota Department of transportation. He was also employed by Metro Transit, Smith Parker, and Hay Dobbs, where he was a project manager & provided consulting services. He loved a challenge and dedicated his life to making transportation and urban design work seamlessly. He had been involved with many important transportation projects in the metro area. He had the ability to make a complex concept understandable to everyone. He was a dedicated public servant who loved his job and the people he worked with. He enjoyed spending time on his farm where he raised brown swiss cattle. He loved the land and enjoyed mentoring the young men that worked on his farm and he was dearly loved in return. He believed in doing a good day’s work and doing it the best way possible. Family was important to Tom and he would always attend his grandchildren’s sporting events, concerts and dance recitals. He also enjoyed spending time attending family events, and holiday gatherings. He was very proud of his children and all their accomplishments. He was a devoted father, grandfather, brother and friend. He always had time to have a quick conversation with someone. He could walk into a room knowing no one and walk out of the room having made the acquaintance of half the room. He will be missed by his family and his friends. He is survived by his significant other, Diana Korpela of Buffalo, daughters, Melanie (Peter) Fox of New Brighton, Sarah (Scott) Shewmake of New Brighton, Diana’s children; Katie (Kyle) Golby of Maple Lake, Kelli Fehn of Monticello, grandchildren, Corbin, Mitchell, Sawyer, Sadler, Kelsey, Ellie, and Eli and his brother Rick (Marcia) Johnson of Dassel, sister-in-law, Kim Benson-Johnson of St. Paul. He is also survived by several nieces, nephews and other relatives and friends. He was preceded in death by his parents, Richard and Kathryn Johnson and a brother, David Johnson.

Thomas Lynn Johnson, age 70, of Buffalo, formerly of Dassel, died Sunday, May 26, 2019, at his farm near Cokato. A funeral service will be held on Saturday, June 1, 2019, at 1:00 p.m. at the Gethsemane Lutheran Church in Dassel with Rev. Laurie... View Obituary & Service Information

The family of Thomas Lynn Johnson created this Life Tributes page to make it easy to share your memories.