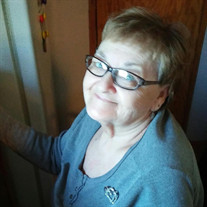 Sylvia Adeline Settergren, age 71, of Darwin, died Saturday, April 6, 2019, at Harmony River Living Center in Hutchinson. A funeral service will be held on Saturday, April 13, 2019 at 1:00 p.m. at Peace Lutheran Church in Hutchinson with the Rev. Layton Lemke officiating. The interment will be held at Peace Lutheran Cemetery in Hutchinson. A visitation will be held on Wednesday evening from 5:00 p.m. to 7:00 p.m. at the Johnson Funeral Home in Dassel and one hour prior to the service at the church on Thursday. Sylvia Adeline Settergren the daughter of Ferdinand and Esther (Rahn) Radunz, was born on January 15, 1948, in Hutchinson, Minnesota. Sylvia was baptized on February 15, 1948 and confirmed at Peace Lutheran Church on May 20, 1962. She attended Hutchinson High School and received her high school diploma from the American School out of Chicago, Illinois on March 14, 1967. On February 5, 1965, Sylvia was united in marriage to William Settergren in Watertown, South Dakota. Together they made their home in Hutchinson before they moved to their farm near Darwin. Sylvia worked as a Dietary Aid and in the laundry for both Burns Manor and Hutchinson Hospital in Hutchinson. She had also been employed at Pamida in Hutchinson for several years. Sylvia loved to spend time sewing, quilting, cooking, baking, canning, gardening, painting and doing crafts. She loved to spend time at bowling league, play games, and cards. She enjoyed spending time with her family for holidays and special events. She was especially fond of her grandchildren and loved the times when her great grandchildren would come to visit. Sylvia was an active member of Al-Anon and helped start Alateen in Hutchinson and was also longtime member of TOPS. She is survived by her husband, William Settergren of Darwin, sons, Kevin Settergren (special friend, Darcy) of Litchfield, Ken (Carman) Settergren of Darwin, Richard (Jean) Settergren of Hutchinson and James Settergren of Litchfield, Ten grandchildren, Sara Settergren, Rachel Settergren, Nikkita Settergren, Anthony Settergren, Skyler Settergren, Hailey Settergren, Sasha Settergren, Jeramy Settergren, Eric Settergren, and Ashley Iverson, six great grandchildren, Gunnar Iverson, Averie Iverson, Noah Nussbaum, Natalie Settergren, Kadence Settergren and Mikila Rech, sister, Suzanne (Roy) Mackedanz of Litchfield, brother-in-law and sister-in-law, Wayne (Betty) Settergren, sister-in-law and brother-in-law, Elna (Dennis) McCutchen, and sister-in-law, Kathy Koenig. She is also survived by several nieces, nephews and other relatives. She was preceded in death by her parents, Ferdinand and Esther Radunz, brother-in-law, Lee Koenig, her mother and father-in-law, Walter and Inez Settergren.

Sylvia Adeline Settergren, age 71, of Darwin, died Saturday, April 6, 2019, at Harmony River Living Center in Hutchinson. A funeral service will be held on Saturday, April 13, 2019 at 1:00 p.m. at Peace Lutheran Church in Hutchinson with the... View Obituary & Service Information

The family of Sylvia Adeline Settergren created this Life Tributes page to make it easy to share your memories.