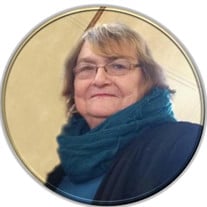 Suzanne Donna Ruth Willette Ahlbrecht, age 67, of Litchfield passed away peacefully at her home on March 27, 2019, surrounded by family and pets. A memorial service will be held on Thursday, April 4, 2019, at 2:00 p.m. at the Gethsemane Lutheran Church in Dassel with the Rev. Laurie O’Shay officiating. There will be a time to gather with the family on Wednesday evening at the Johnson Funeral Home from 5:00 p.m. to 7:00 p.m. and one hour prior to the service at the Gethsemane Lutheran Church on Thursday. In lieu of flowers memorials are preferred to be given to Ecumen Hospice of Litchfield. Suzanne Donna Ruth Willette Ahlbrecht passed away peacefully at her home on March 27, 2019, surrounded by family and pets. She was born January 23, 1952, in Montevideo, Minnesota, and spent her childhood years in St Paul. When she was 13 she moved with her parents, Wally and Dolores (Kuehl) Willette, to Dassel, and was later confirmed at Gethsemane Lutheran Church. Sue was the salutatorian of the class of 1970 at Dassel High School. On June 19, 1970, Suzanne was united in marriage to Allen Arvid Ahlbrecht at the Gethsemane Lutheran Church in Dassel. Together they moved to the Ahlbrecht family farm northwest of Hector. Besides raising three children and numerous pets, they enjoyed building a home together: finding and refinishing antiques, decorating, landscaping, cooking, and having family gatherings to show off their beautiful home. Around 1983 Sue and Al became foster parents. They fostered over 30 children during the next 10 years and even took care of dogs for the Humane Society. Sue decided, at the age of 35, to go back to school where she obtained her Associate Degree from Willmar Community College, and then her Bachelor’s and Master’s degrees from St Cloud State University. She graduated summa cum laude and won several other awards, including a writers’ award from the American Association of University Women. Sue was a trailblazer in her field in many ways. She went back to school after starting a family, back when not so many women were doing so. She taught women’s studies classes during grad school, and she helped run the Family Sexual Abuse Treatment Program, working with a population that many practitioners do not want to work with. She earned her psychology license and helped start Greater Minnesota Family Services which now has hundreds of employees all over the state. Eventually she bought a building in Bird Island and went into private practice, continuing to see clients even in her home office in Litchfield up until the days before she got sick. Suzanne has certainly touched numerous lives and will be dearly missed by many. She was preceded in death by her husband and best friend, Allen Ahlbrecht; brother, Paul Willette; grandparents, Walter and Laura Kuehl and Arthur and Leona Willette. Suzanne is survived by her parents, Wally and Dolores Willette, daughter, Laurel Ahlbrecht, daughter, Rebecca Dillingham and her husband, Shawn, son, Allen Ahlbrecht, granddaughter, Aleisha Ahlbrecht, grandson, Dan Ahlbrecht, granddaughter, Samantha Mortenson, and countless other family and friends. May she rest in peace.

Suzanne Donna Ruth Willette Ahlbrecht, age 67, of Litchfield passed away peacefully at her home on March 27, 2019, surrounded by family and pets. A memorial service will be held on Thursday, April 4, 2019, at 2:00 p.m. at the Gethsemane Lutheran... View Obituary & Service Information

The family of Suzanne Donna Ruth Willette Ahlbrecht created this Life Tributes page to make it easy to share your memories.

Send flowers to the Ahlbrecht family.