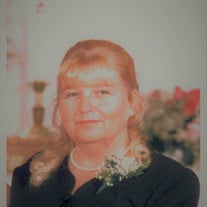 Susan Mary Jensen, age 60, of Dassel, died Friday, July 13, 2018, at her home in Dassel. A funeral service will be held on Thursday, July 19, 2018, at 11:00 a.m. at Cornerstone Church in Litchfield with Pastor Paul Jorgensen officiating. There will be a time to gather with the family on Wednesday evening from 5:00 p.m. to 7:00 p.m. at the Johnson Funeral Home in Dassel and one hour prior to the service at Cornerstone Church in Litchfield on Thursday. Susan Mary Jensen, the daughter of Henry and Minnie (Rushford) Lockwood on August 29, 1957, in Buffalo, Minnesota. Susan was baptized in Loretto, Minnesota in 1957 and baptized at Cornerstone Church in 2016. Susan had been a member of the Crystal Hills Assembly of God in Paynesville, the Church of Christ in Dassel, and Cornerstone Church in Litchfield where she had enjoyed Mugg’s & Muffins and other women’s events. Susan grew up in Rockford where she attended elementary school until the family moved to Paynesville where she graduated from Paynesville High School in 1975. In July of 1976, Susan was united in marriage to Terry Coughlin. Together they made their home in Dassel until 1986. To this union two children were born. On February 23, 1996, Susan was united in marriage to Alvin Jensen in Willmar, Minnesota. Together they made their home in Paynesville for several years before they moved to Belgrade. To this union one child was born and gained a step-son. In 1997, Susan and Alvin moved to Dassel where they have since resided. Susan had been employed at Spectralytics in Dassel for the past 16 years, where she had been employed as a laser and scope inspector of medical devices. She enjoyed spending time, listening, laughing, and swimming with her grandchildren. She loved to take spontaneous surprise pictures of her family and friends. She could often be found crocheting, doing crafts and taking road trips around Minnesota, visiting state parks and enjoying the wonder of the many waterfalls around the state. She was a hard worker and never gave up. She had a contagious laugh and enjoyed spending time with her family for holidays and special events. She enjoyed talking to family and friends on the phone. Her family was always on her mind, she would often take time out of her day to sit and pray for their health and safety. She is survived by her husband, Alvin Jensen of Dassel, children, Timothy (Kate) Coughlin of Cokato, Sherri (Adam) Wichmann of Buffalo, and Jennifer Jensen of Dassel, and a step-son, Corey Jensen of Willmar, eight grandchildren, Gabe Coughlin, Ryder Coughlin, Jasmine Nothnagel, Jeremy Nothnagel Jr., Justin Nothnagel, Patrick Bratten, Elenora Wichmann and Evelynn Wichmann. She is also survived by her siblings, Melvin (Mary) Lockwood of Andover, Don (Jan) Lockwood of Duluth, and Dianna (Dennis) Jussila of Clearwater, sister-in-law, Shirley Lockwood of Cedar, Minnesota. She was preceded in death by her parents, two sisters, Mildred Peterson and Sandy Lockwood, two brothers, Richard Lockwood and Bill Lockwood, one nephew, Dade Jussila and a niece, Chris Swartzer.

Susan Mary Jensen, age 60, of Dassel, died Friday, July 13, 2018, at her home in Dassel. A funeral service will be held on Thursday, July 19, 2018, at 11:00 a.m. at Cornerstone Church in Litchfield with Pastor Paul Jorgensen officiating. There... View Obituary & Service Information

The family of Susan Mary Jensen created this Life Tributes page to make it easy to share your memories.