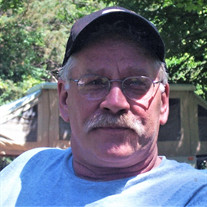 Steven Wayne Paulson, age 65, of Dassel, died Saturday, August 17, 2019, from the complications of cancer at the Augustana Lakeside Health Care Center of Dassel. A memorial service will be held on Saturday, August 24, 2019, at 4:00 p.m. at the Evangelical Covenant Church in Dassel with Pastor Douglas Johnson officiating. The interment of the urn will take place at the Dassel Community Cemetery. There will be a time to gather with the family on Friday evening from 5:00 p.m. to 7:00 p.m. and two hours prior to the memorial service on Saturday afternoon at the Evangelical Covenant Church in Dassel. Steven Wayne Paulson was the second of four sons born to Wayne and Gladys Paulson. He was born on March 16, 1954. During his youth he lived in Dassel and graduated from Dassel High School in 1972. Steve was baptized at the Evangelical Covenant Church and was also confirmed there in 1969. As a high school student Steve enjoyed athletics and participated in football, basketball and baseball. He even did some acting in school plays. In December of 1968, Steve was awarded the Boy Scout Eagle Scout Award. Steve graduated from St. Cloud State College with a Psychology Degree in 1980. He likes to tell how he “crammed four years of college into eight”. Steve worked ten years in the Mental Health Unit at Hutchinson Community Hospital. In 1984 he moved to the Minneapolis area and for thirty-two years worked the night shift on the Mental Health Unit of Abbott Northwestern Hospital. He retired in 2016 only because of health reasons. Steve’s pickup or van was always ready for travel and camping. The road trips usually took him west, northwest or southwest. His golf clubs were also part of his travel gear. Steve enjoyed photographing the scenery of the places he traveled. Car repair was a hobby and a necessity for Steve. He would say his car had so much Great Stuff insulation it could float in a flood. There was always a smile and a story as he spoke about his Renault, Mazda, Rambler, Ford, Toyotas and the vans. His blue Toyota pickup surpassed 400,000 miles and was laid to rest at French Lake Junk Yard. Steve also enjoyed cooking and good food. He gathered and shared recipes and gave recommendations for his favorite restaurants. Among Steve’s biggest fans were his nieces and nephews: Annalisa, Conrad, Kim, Nigel, Emelia, Dustin, Mitch and Shania. Birthday shopping trips, going out to eat, golfing, and hanging out with Uncle Steve was special. The Grandpa Campout each Spring brought out Grandpa Wayne, the four sons and the nieces and nephews. It continues now, 32 years later, with the great nieces and nephews included. Steve was a good friend and was blessed with many good friends. He often shared the tales of adventures with Tom Melius, John Palmen, Pete O’Fallon, Shari Carlsted, Mark Warne, Sandy Tally, Brad Burch, and Steve Varland. Steve is survived by his brothers, Tim (Candace), Mark (Danette) and Mike (Tammy). His nieces and nephews, Kim (Joe) Norman, Mitchell, Annalisa (Jason) Christensen, Conrad, Emelia (Nolan) Pitlick, Nigel (Michelle), Dustin (Jessica) and Shania. Steve was also adored by great nieces and nephews, Molly, Mason and Max, Parker, Paige and Peyton, Lilly and Claire, Mackenzie, Chloe and Ava, Sterling and Thomas. Steve is also survived by uncles and aunts, Cliff and LaRene Johnson, Stuart and Joan Johnson, and Annabelle Johnson, and a large number of loved cousins and friends. He was preceded in death by his parents, Wayne and Gladys (Johnson) Paulson and his paternal grandparents, Clarence and Florence (Frelander) Paulson and his maternal grandparents, Harry and Esther (Mattson) Johnson.

Steven Wayne Paulson, age 65, of Dassel, died Saturday, August 17, 2019, from the complications of cancer at the Augustana Lakeside Health Care Center of Dassel. A memorial service will be held on Saturday, August 24, 2019, at 4:00 p.m. at... View Obituary & Service Information

The family of Steven Wayne Paulson created this Life Tributes page to make it easy to share your memories.

Send flowers to the Paulson family.