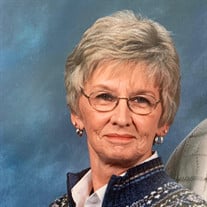 Sheri L. Upton, age 82, of Dassel, died, Sunday, January 19, 2020, at the Cokato Manor. A funeral service will be held on Thursday, January 23, 2019, at 11:00 a.m. at the Gethsemane Lutheran Church in Dassel with Rev. Laurie O’Shea officiating. The interment will be at the Dassel Community Cemetery following the service. A visitation will be held on Wednesday evening from 4:00 p.m. to 6:00 p.m. at the Johnson Funeral Home in Dassel with a one-hour visitation prior to the service on Thursday at the Gethsemane Lutheran Church in Dassel. In lieu of flowers, memorials preferred to the Alzheimer’s Association (alz.org). Sheri was born on April 13, 1937 in Hutchinson, MN, the daughter of George and Florence (Moody) Warnke. Sheri grew up in Silver Lake, MN, where she was baptized and confirmed at the Czech Brethren Presbyterian Church. She graduated from Silver Lake High School in 1955. She was very active in school plays and music and was a majorette in the marching band. On May 5, 1957, Sheri was united in marriage to Marlyn Smith at Czech Brethren Presbyterian Church in Silver Lake. They moved to Lake Washington in Dassel and raised their children, Rory and Tracy. Sheri was employed at Minnesota Hatchery in Dassel as a chicken sexer. This always sparked conversation for those who met Sheri later in life and could never imagine it. Marlyn and Sheri purchased Dassel Sports and Marine in 1966 from Stan Varland, which they owned and operated until 1982. Sheri was also employed at the Farmers State Bank of Darwin for approximately 25 years. In 1982, she and Marlyn purchased Smith Sanitation from Les and Joan Benson, which Sheri owned until 1994. Sheri was very active at Gethsemane Lutheran Church where she sang in the Senior Choir, was the Junior Choir director for over 20 years, served on the church council, and served as the church treasurer. On April 9, 1999, Sheri married Darrel Upton at Gethsemane Lutheran in Dassel. Together they made their home on Lake Stella in Darwin, MN and wintered in Fountain Hills, AZ. Sheri and Darrel were members of Shepherd of the Hills Lutheran Church in Fountain Hills, where Sheri also sang in the choir. Sheri loved singing with friends for special events and was a member of the Rainbow Singers. She enjoyed golfing, baking, and was a talented cross stitcher, making many beautiful gifts for family and friends. Sheri enjoyed attending her grandkids’ sporting events when she was in MN and was especially proud whenever she could attend one of their musical concerts. She was also a big Twins and Vikings fan and liked watching their games on TV. Sheri is survived by her children, Rory (Peggy) Smith of Dassel, Tracy (Andy) Lawson of Greenfield, and step-daughter Laurie (Art) Davis of Northville, MI; grandchildren, Adam Smith (Meredith Miller), Courtney Smith (Kyle Nicks), Kelly Lawson, Will Lawson, and Drew Lawson; step-grandchildren, Ryan (Brigid) Davis, Julie (Bobby) Ratekin, Becky (Derek) Nedo; step-great-grandchildren, Avery Nedo, McKinley Nedo, Davis Ratekin, and Lincoln Davis; sisters-in-law, Ilo Broberg, Elvera Smith, and Marlyce Hoium; brother-in-law, Robert Smith; cousin, Mary (Don) Hokanson; nieces, nephews, and numerous friends. Preceded in death by her parents; husbands, Marlyn on 9/20/1987 and Darrel on 9/12/2012; and her sister, Marlyce Hepner.

The family of Sheri L. Upton created this Life Tributes page to make it easy to share your memories.

Send flowers to the Upton family.