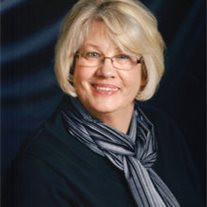 Sharon Louise Asplin, age 66, of Dassel, died Sunday, December 25, 2016, after a courageous battle with cancer. A memorial service will be held on Friday, December 30, 2016, at 11:00 a.m. at the Gethsemane Lutheran Church in Dassel with the Rev. Daniel Belgum-Blad officiating. Interment will be held privately at the Steelesville Cemetery in Dassel on a later Date. There will be a time to gather with the family on Thursday evening from 4:00 p.m. to 7:00 p.m. at the Gethsemane Lutheran Church in Dassel. There will be a one hour visitation prior to the service on Friday. The Johnson Funeral Home in Dassel is in charge of the funeral arrangements. Sharon Louise "Mattson" Asplin, the daughter of Harold and Loraine (Shelton) Mattson, was born on September 29, 1950, in Hutchinson, Minnesota. Sharon was baptized and later confirmed at the Stockholm Lutheran Church in rural Cokato. She grew up in the Dassel area and attended the Lake Jennie Country School and graduated from Dassel High School in 1968. She continued her education at the Litchfield Hospital where she received her X-ray Technician certificate. She worked as an Office Manager / X-ray Technician for over 25 years at the Dassel Chiropractic Center and for the past several years had worked as a Scheduler for the Orthopedic Clinic in Hutchinson. On June 23, 2001, Sharon was united in marriage to Todd Asplin. Together they made their home in Dassel. She loved her family deeply and enjoyed the time she could spend with her grandchildren and the holidays with family and friends. She always had time for a cup of coffee with her friends. Sharon had been in the same card club for over 40 years. You could often find Sharon tending her flowers during the summer. She was a talented seamstress and had fitted many wedding dress for a nervous bride. She had made the Red Rooster and Corn Carnival candidate's sashes for several years. Sharon had volunteered in Dassel; she had worked for many years as the volunteer coordinator for the serving line at Red Rooster Days. She was the recipient of the Aquatennial Commodore Award for volunteered service to the Dassel Community. Sharon had been active at Gethsemane Lutheran Church and had served on the church council, the alter guild, taught Sunday school, and had played piano for the pre-school Sunday school children. She was elected to a seat on the Dassel City Council where she served a term and was reelected to a second term in November. Sharon is survived by her father Harold (Helen) Mattson of Dassel, husband, Todd Asplin of Dassel, children, Ryan (Tina) Erickson of Cokato, and Katie (Russ) Atkinson of Waite Park, three grandchildren, Boedy Erickson (6), Grady Erickson (2), and Henry Atkinson (2), siblings, Gordy Mattson of Minneapolis, Delmar (Suzanne) Mattson of Union, MO, step-sisters, Calla Beal of Minnetonka, and Darla (Loren) Nass of Dassel, along with numerous other family and friends. Sharon was preceded in death by her mother, Loraine Mattson, step-brother, Gaylyn Wigen, and sister-in-law, Correne Mattson

Sharon Louise Asplin, age 66, of Dassel, died Sunday, December 25, 2016, after a courageous battle with cancer. A memorial service will be held on Friday, December 30, 2016, at 11:00 a.m. at the Gethsemane Lutheran Church in Dassel with the... View Obituary & Service Information

The family of Sharon Louise Asplin created this Life Tributes page to make it easy to share your memories.

Send flowers to the Asplin family.