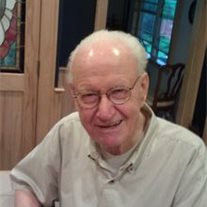 Seymour Allen Peterson, age 89, of Dassel, died Wednesday, September 3, 2014, at the Augustana Lakeside Health Care Center of Dassel. A funeral service will be held at 2:00 p.m. on Saturday, September 13, 2014, at the Gethsemane Lutheran Church in Dassel. The interment will be held at the Dassel Community Cemetery. A time to gather with the family will be held Saturday one hour prior to the service on at the Gethsemane Lutheran Church in Dassel. The Johnson Funeral Home in Dassel is in charge of the funeral arrangements. Seymour Allen Peterson, the son of Carl J. and Olga (Lindquist) Peterson, was born on September 22, 1924, in Dassel, Minnesota. He grew up and graduated from the Dassel High School. He was baptized and confirmed in the Christian faith and was presently a member of the Gethsemane Lutheran Church at the time of his death. Seymour was inducted into the United States Army Air Corps and proudly served his country during World War II. Upon his discharge, Seymour initially enrolled at the University of Minnesota with an agronomy major to study modern hybrid seed technology. Although the family seed corn business was a good opportunity, his passion was for mechanics and invention. He eventually left the University and purchased a controlling interest in Storm Industries, a budding Dassel business supplying poultry equipment to the egg industry. On October 26, 1951, Lorraine was united in marriage to Seymour Peterson at the St. Paul's Lutheran Church in Minneapolis. As newlyweds, they made their home in Dassel until 1975. The move to Minneapolis was motivated by his new job at the St. Paul 3M plant and the commute from Dassel to East St. Paul was a problem. He also worked at Hewett Tool, and eventually became a production line engineer for Donaldson Company, where he worked designing production line equipment for various plants around the world until his official retirement in 2005 at the age of 81. The entire family, extended family, and friends celebrated Seymour and Lorraine's 60th anniversary in 2011. He enjoyed reading, writing, photography, and had sung in the church choir. He was proud of the 15 patents that he held for products that he had invented. During his tenure as Mayor of Dassel Village, Seymour was instrumental in writing the letters to the editor, conducting hearings, bonding, and designing what we now use every day as paved streets, curb and gutter, modern sanitary and storm sewers. His past months were consumed with helping the Dassel Area Historical Society document the Dassel area seed business. He was also working on a history of Storm Industries as well. Seymour enjoyed writing. One unfinished project Seymour was writing related to series of letters from his family to his sister Louise, which were found intact in the estate of Louise Guhl, Seymour found it to be a treasure trove of local Dassel gossip from 1934 through 1938 when Louise was in Germany studying music. Seymour was typing up those letters when his health began to fail. He is survived by his children, Jan (Ross) Flynn of Detroit, Michigan, Joan (Kurt) Frantzen of Colchester, Connecticut, Ford (Barb) Peterson of Dassel, Wade Peterson of Minneapolis, six grandchildren, Justin Flynn, Ginger Payton, Jonathan Flynn, Nels Frantzen, Garth Frantzen, and Renee Krueger, five great-grandchildren, Haley Flynn, Hannah Flynn, Austin Payton, Gabriel Payton, and Daniel Payton, who was born the very same day Lorraine passed in 2012. He was preceded in death by his wife, Lorraine on July 20, 2012, his parents, and his sister, Louise Guhl.

The family of Seymour Allen Peterson created this Life Tributes page to make it easy to share your memories.