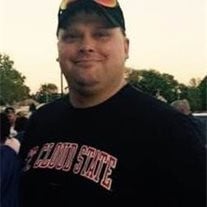 Samuel Steven Rossman, age 42, of Kimball died Wednesday, November 2, 2016, at his residence. A memorial service will be held at 10:00 a.m. on Monday, November 7, 2016, at the Evangelical Covenant Church in Dassel with the Pastor Mark Andrews officiating. The interment will be held at the Lake Union Covenant Cemetery in South Haven following the service. There will be a time to gather with the family from 4:00 p.m. to 9:00 p.m. on Sunday evening at the Johnson Funeral Home in Dassel with a time to gather with the family one hour prior to the service at the Evangelical Covenant Church in Dassel on Monday. Samuel Steven Rossman, the son of Steven and Connie (Myllykangas) Rossman was born on June 12, 1974, in Litchfield, Minnesota. Samuel grew up in the South Haven area and graduated from Kimball High School in 1992, where he had been an active participant in Kimball Cubs High School boys sports along with volunteer coaching for the younger girls. He was baptized and confirmed in the Christian faith and was a member of the Lake Union Covenant Church in rural South Haven at the time of his death. On March 10, 1999, Samuel was united in marriage to Crystal Fraser in Minneapolis. Together they made their home Kimball. He had been employed for several years at Hutchinson Technology Inc., Fingerhut in St. Cloud, and for the past several years had been employed at Malco Products Inc. in Annandale. Samuel enjoyed meeting knew people and could alway start up a conversation. He loved holidays and special events with family and friends. He was a great practical joker, always pulling your leg and giving you a hard time. He had a passion for collecting super hero comic book, car shows, and NASCAR racing. Samuel was a sports fan and could often be found watching, football, baseball, hockey, and basketball. He loved football and coached JV football and was a member of the Kimball Cubs High School Football Coaching Staff from 2004 until 2014 when he had to resign due to his health. Samuel will be missed by his family and his many friends. He is survived by his two children, Ariel (Kirk) Pramann of Kimball, Kyrie Rossman of Kimball, parents, Connie and Steven Rossman of South Haven, sister, Jaclyn Rossman and significant other, Pete Flatten of Kimball, sister-in-law, Bonnie Rossman of St. Cloud, several nieces, nephews, aunt, uncles and cousins. He was preceded in death by his sister, Jennifer (Rossman) Johnson, brother, Patrick Rossman, maternal grandparents, Gordon and Lillian Myllykangas, paternal grandparents, Edwin and Marie Rossman.

Samuel Steven Rossman, age 42, of Kimball died Wednesday, November 2, 2016, at his residence. A memorial service will be held at 10:00 a.m. on Monday, November 7, 2016, at the Evangelical Covenant Church in Dassel with the Pastor Mark Andrews... View Obituary & Service Information

The family of Samuel Steven Rossman created this Life Tributes page to make it easy to share your memories.

Send flowers to the Rossman family.