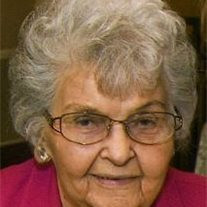 Ruth Helen (Bengtson) Swanson March 25, 1918 - May 2, 2013 Ruth Swanson, 95, of Golden Valley, formerly of Willmar, passed away peacefully early in the morning of May 2, 2013. There will be a visitation on Sunday May 5, 2013, from 1:00 p.m. to 3:00 p.m. at the Johnson Funeral Home in Dassel. After the visitation an interment will be held at the Dassel Community Cemetery. A memorial service will be held at 10:30 a.m. on Saturday, May 11, at the Salem Covenant Church, 2655 - 5th St NW, New Brighton, MN 55112. Ruth Helen Swanson was born to Oscar and Hannah (Carlson) Bengtson in Willmar, Minnesota on March 25, 1918 and was baptized at the Mission Covenant Church in Willmar. Her family moved to Kandiyohi, Minnesota where she started school and then to Dassel, Minnesota where she was confirmed in the Dassel Covenant Church and graduated from the Dassel High School. In 1938, she married Edmund Swanson and they moved to Willmar where they were members of First Covenant Church. In 1998, Ruth and Edmund moved to Covenant Village in Golden Valley. Ruth was very active in the music ministry of the church serving as the organist at First Covenant Church and the First Presbyterian Church for over 30 years as well as being the pianist for the Covenant Hour Radio program for 25 years. She also was active in the circles and Covenant Woman. Ruth is survived by her five children: Connie(Jack) Daugherty of Eden Prairie, MN; Larry (Connie) Swanson of Fargo, NO; Tim (Kathy) Swanson of Long Lake, MN; Barbara (Rudy) Ronning of Appleton, MN: and Shannyn (Mick) Stoffel of Blaine, MN, 15 grandchildren; 30 great-grandchildren and one brother: Gordon (Gladys) Bengtson of Golden Valley. She was preceded in death by her husband, Edmund; granddaughters, Kathryn Mary Daugherty and Ann Margaret Daugherty; great grandson, Jack Alexander Roane and her seven brothers and one sister.

The family of Ruth Swanson created this Life Tributes page to make it easy to share your memories.