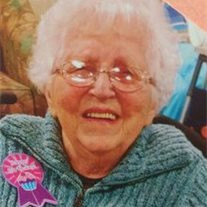 Ruth Mary Leukuma, age 86, of Dassel, died Tuesday, July 11, 2017, at the Augustana Lakeside Health Care Center in Dassel. A funeral service will be held at 11:00 a.m. on Friday, July 14, 2017, at the First Apostolic Lutheran Church with Mark Koivisto officiating and interment at the Cokato Finnish Cemetery, rural Cokato. A visitation will be held Thursday evening from 5:00 p.m. to 8:00 p.m. and one hour prior to the service on Friday morning at the First Apostolic Lutheran Church, rural Dassel. Ruth Mary "Arvola" Leukuma, the daughter of Hjalmer and Anna Greeta (Niemela) Arvola, was born on September 20, 1930, in Meadow Township, Wadena County. She grew up and graduated from Sebeka High School. Ruth was a member of the First Apostolic Lutheran Church in Dassel at the time of her death. On February 20, 1954, Ruth was united in marriage to Carl Leukuma in Sebeka, Minnesota. Together they made their home in Minneapolis until 1960 when they moved to a farm near Cokato. In 1981, Ruth and Carl moved to Menahga where they made their home until 1993 when they moved to Dassel. in January 2006, Ruth made her home in the Dassel and Cokato area. Ruth enjoyed cooking, visiting, and traveling. She is survived by her children, John (Shelley) Leukuma of Kalispell, Montana, Chuck (Jill) Leukuma of Orono, Mark (Katie) Leukuma of Delano, Greta (Kenneth) Anderson of Cokato, Harry (Laura) Leukuma of Delano, Eric (Naomi) Leukuma of Chassell, Michigan, Anita (Kurt) Harmala of Dassel, Hans Leukuma of Negaunee, Michigan and Alaska, Trudi (Roger) Haataja of Calumet, Michigan and Katrina (Dave Moonen) Leukuma of Darwin, 68 grandchildren, 39 great grandchildren, sibling, Leslie (Louise) Arvola of Sterling, Illinois, Norma Hillukka of Menahga, Verna (Harvey) Grangroth of Cokato, Joyce Kotila of Cokato, Florence (Don) Halonen of Buffalo, Kenny (Arlene) Arvola of Menahga, and Dave (Mary) Arvola of Cokato. She was preceded in death by her husband, Carl, grandson, Evan J. Anderson on October 21, 2011, sister, Lila Johnson and infant brother, Rudy Arvola.

The family of Ruth Mary Leukuma created this Life Tributes page to make it easy to share your memories.

Send flowers to the Leukuma family.