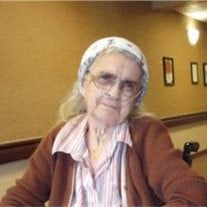 Ruth Anne Frieda (Werner) Abrahamson, age 85, died peacefully January 26, 2014 at the Cokato Manor in Cokato, MN, with family in attendance. A funeral service will be held on Saturday, February 1, 2014, at 2:00 p.m. at the Johnson Funeral Home in Dassel with Pastor Tim Redfield officiating. Following the service an interment will be held at the Ellsworth Cemetery in rural Darwin, MN. A visitation will be held one hour prior to the service on Saturday at the Johnson Funeral Home in Dassel. Those who wish to donate in lieu of flowers are asked to please consider: St. Peter's Evangelical Lutheran Church in Darwin, the Cokato Museum, and the Cokato Manor. Ruth Anne Frieda (Werner) Abrahamson born on February 29, 1928 in Ellsworth Township, MN to Herman E. and Aurelia (Wallmow) Werner. She grew up on the family farm and attended the local one-room school through the eighth grade. A woman of faith, she was a life-long member of St. Peter's Evangelical Lutheran Church of Ellsworth Twp. (rural Darwin). One of her claims to fame was that as a leap-year baby, her grandchildren all had their twenty-first birthdays before she did. After leaving the farm, she lived in Dassel where she worked at the local bakery. She married Harvey Benhart Abrahamson on May 20, 1951, and settled in Cokato where they raised five children. During that time she studied for, and received her GED certificate. She enjoyed jokes and riddles, and word puzzles. For many years her daily routine included bible reading and at least one crossword puzzle. She enjoyed her large vegetable garden, bird watching, and collecting rocking-horse ornaments. Knitting was also a hobby, and many family members were warmed by blankets and Afghans from her hands. She met regularly with a group of others with similar interests; they called themselves the "Knitpickers". She gave generously of her time, volunteering for a number of organizations, including work with the developmentally disabled, the Cokato Museum, and especially the Cokato Manor, where she helped with activities for over 25 years. When she moved into the Manor for the last year and a half, it was like going to a second home, and she had nothing but praise and gratitude for the care she received there. She is survived by her children Harmon (Julie) of Grand Forks, ND, Laurie (Brad) Wright of Minneapolis, MN, Lynn (Bernie) DeRoche, of Limestone, MI, Nathan of Moose Lake, MN, and Matthew, of Cokato, along with four grandchildren, Shannon Wright, Joel Abrahamson (Dorea Ruggles), Krista Abrahamson, and Peter Abrahamson, and one great-grandchild, Theron Wright. She was preceded in death by her parents, her husband, Harvey, and her three brothers, Frank, Ernest, and Harry.

Ruth Anne Frieda (Werner) Abrahamson, age 85, died peacefully January 26, 2014 at the Cokato Manor in Cokato, MN, with family in attendance. A funeral service will be held on Saturday, February 1, 2014, at 2:00 p.m. at the Johnson Funeral Home... View Obituary & Service Information

The family of Ruth Anne Frieda (Werner) Abrahamson created this Life Tributes page to make it easy to share your memories.