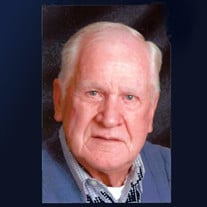 Ronald Stephen Nolan, age 86, of Orono, formerly of Dassel, died Thursday, January 28, 2021, at the Park Nicollet Methodist Hospital in St. Louis Park. A walk-through celebration of life will be held on Saturday, February 6, 2021, from 3:00 p.m. to 5:00 p.m. at the Johnson Funeral Home in Dassel. A private memorial service will be held on Sunday, February 7, 2021 at 10:30 am at the Lyndale Lutheran Church in Maple Plain. A Private interment of the urn with military honors will be held at Fort Snelling National Cemetery in Minneapolis on a later date. For those who wish to attend the walk-through celebration of life or the private memorial service are reminded that social distancing and a mask will be required to attend. Ronald Stephen “Steve” Nolan, the son of Frank and Gladys (Molin) Nolan, was born on October 9, 1934, in Grand Rapids, Minnesota. The family resided in Remer until they moved to a farm near Maple Plain. He was baptized on June 4, 1935 by Pastor Clarence H. Johnson and later confirmed in the Lutheran Faith at Lyndale Lutheran Church in Independence. He was presently a member of the Gethsemane Lutheran Church in Dassel. He graduated from the Mound High School in 1953. On December 17, 1953, Steve was inducted into the United States Army until December 16, 1955, when he was transferred to the United States Army Reserve for eight years. Upon returning from the service, Steve attended Dunwoody Institute and received his degree. On June 13, 1957, Steve was united in marriage to Marva Justus at the Lyndale Lutheran Church. Together they made their home in Maple Plain before they moved to Long Lake and then back to the village of Independence. Steve had been employed at Archie Walker Volkswagen which became Westside Volkswagen, eventually obtaining a position as the Shop Forman. He had also been employed by Gelco in the fleet maintenance call center. In 1987, Marva and Steve moved to Selmer, Tennessee where Steve was employed as a school bus driver and did odd jobs for friends. In 2002, Marva and Steve moved to Dassel, where they have since resided until July of 2020, when they moved to the Trails of Orono. He enjoyed spending time with his family, walking or going to Snap Fitness for exercise, and loved to go on road trips around the United States. He enjoyed exploring new places with his family and loved the times they would get together for holidays and special events. He will be missed by his family and his many friends. He is survived by his wife, Marva Nolan of Orono, daughters, Patty (Jon) Malecek of Maple Plain, Kay (Kraig) Nowell of St. Michael, four grandchildren, Rob Malecek, Allison (Joe) Rude, Derek Malecek (girlfriend, Hailie Schultz), and Matt Nowell. He has one great grandchild, Claire Rude. He is also survived by his sister-in-law, Grace Nolan, several nieces, nephews, and other relatives. He was preceded in death by his parents, Frank and Gladys Nolan, siblings, Glenyce Sween and her husband A. Randolf Sween, and Jim Nolan and nephew Michael Sween.

The family of Ronald Stephen "Steve" Nolan created this Life Tributes page to make it easy to share your memories.

Send flowers to the Nolan family.