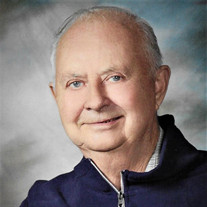 Robert John Trocke, age 82, of Dassel, formerly of Plato, passed away Saturday, October 13, 2018, at his home. A private family service will be held at the Johnson Funeral Home Chapel in Dassel with the interment held at Saint Paul’s United Church of Christ Cemetery in Plato. Robert John Trocke, the son of John and Emilie “Millie” (Harjes) Trocke was born on May 3, 1936, in Hamburg, Minnesota. Robert grew up in Hamburg and later Plato, graduating from Glencoe High School in 1954. Robert continued his education by attending the Dunwoody Institute in Minneapolis. Robert was baptized on May 17, 1936, in Hamburg and was confirmed at Saint Paul’s United Church of Christ in 1950, in Plato. He was an active member and servant of his church. He was a charter member of Babbitt Lutheran Church, served on the church council of Saint Paul’s United Church of Christ in Plato, and presently was a member of Gethsemane Lutheran Church in Dassel. Robert was also an involved and respected member of the community. He was a member of the Plato Fire Department for 20 years and a charter member of the Plato Lion’s Club receiving the Melvin Fellow award. On May 18, 1955, Robert began serving his country by entering into the United States Army. He served in a missile battery division, the War Hawks. He received an honorable discharge from the United States Army on April 30th, 1957. On October 22, 1960, Robert was united in marriage to Karen Kamps at Saint Paul’s Lutheran Church in Arlington, Minnesota. They started their life together and made their home in Babbitt, Minnesota from 1960 through 1965. In 1965, Robert and Karen moved to Plato where Robert and his father, John, owned and operated Trocke’s Painting Service. He established the Painting Service as a respected business sought after by many businesses and individuals throughout the area. Upon retiring in 2000, Robert and Karen moved to Dassel where they made their home on the shores of Big Swan Lake. Robert was devoted to his family and spending time with them by going on many family vacations, celebrating holidays, birthdays and just about any other family event. He loved outdoor family activities, it could be a canoe trip to the boundary waters, camping throughout the United States, walleye fishing or just sitting by a campfire with his family. When he was not outdoors you could find him solving crossword puzzles, playing sheepshead, or listening to old time polka music. A private man who enjoyed the times with his family and close friends. He is survived by his wife, Karen Trocke of Dassel, children, Linda Trocke of Eagan, Robert Jr. (Sandy) Trocke of Arizona, Cynthia (Al) Stipek of Waconia, and Timothy (Janell) Trocke of Dassel, five grandchildren, Sarah Trocke, Jordan Stipek, Maria Stipek, Emily Trocke, and Elizabeth Trocke, siblings, Harold (Shirley) Trocke of Eden Prairie, Shirley (Jim) Hughes of Apple Valley, Allen (Pat) Trocke of Glencoe. He was preceded in death by his parents, John and Emilie Trocke.

Robert John Trocke, age 82, of Dassel, formerly of Plato, passed away Saturday, October 13, 2018, at his home. A private family service will be held at the Johnson Funeral Home Chapel in Dassel with the interment held at Saint Paul&#8217;s... View Obituary & Service Information

The family of Robert John Trocke created this Life Tributes page to make it easy to share your memories.

Send flowers to the Trocke family.