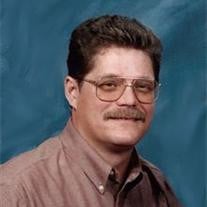 Richard Alvin Larson, age 52, of Dassel, died Wednesday, April 18, 2012, at the North Memorial Hospital in Robbinsdale. A memorial service was held on Saturday, April 21, 2012, at 1:00 p.m. at the Gethsemane Lutheran Church in Dassel with the Rev. Steven Olson officiating. A time to gather with family was held on Friday evening from 5:00 p.m. to 8:00 p.m. at the Johnson Funeral Home in Dassel and one hour prior to the service on Saturday at the church. Richard "Rick" Alvin Larson, the son of Jack and Ellen (Brose) Larson, was born on July 21, 1959, in Sandstone, Minnesota. He grew up in the Sandstone and Sturgeon Lake, Minnesota areas and graduated from the Willow River High School in 1977. After high school, Rick attended the 916 Vo-Tech School. On June 14, 1986, Rick was united in marriage to Karen Ellies in Lafayette, Minnesota. Together they made their home in East Bethel until 1995 when they moved to the Dassel area, where they have resided here since. Rick was employed by Express Scripts, Inc. in Bloomington as a computer programmer. He enjoyed his work and the people that he worked with. Rick loved spending time with family and friends and spent many hours helping coach Luke and Samantha in their sports activities. He was both their cheerleader and their biggest fan. He enjoyed baseball, basketball and football both as a participant and a fan throughout his lifetime. Rick will be remembered for his quick wit and sense of humor. He will deeply be missed by his family and his many friends. Rick is survived by his wife, Karen Larson of Dassel, children, Lucas Larson and Samantha Larson of Dassel, siblings, Fred (Kris) Larson of Sandstone, Jackie Miller of Osseo, Gary (Dori) Larson of Orange Park, Florida, Barb (Ken) Cisar of Willow River, James Larson of Oklahoma, Terry Larson of Alaska, Lucinda Hovrud (Jean Free) of Coon Rapids, Rodney (JoLynne) Larson of Elk River, and Kyle (Tabitha) Larson of Bentonville, Arkansas. He was preceded in death by his parents and a brother, Bill.

Richard Alvin Larson, age 52, of Dassel, died Wednesday, April 18, 2012, at the North Memorial Hospital in Robbinsdale. A memorial service was held on Saturday, April 21, 2012, at 1:00 p.m. at the Gethsemane Lutheran Church in Dassel with the... View Obituary & Service Information

The family of Richard Larson created this Life Tributes page to make it easy to share your memories.

Send flowers to the Larson family.