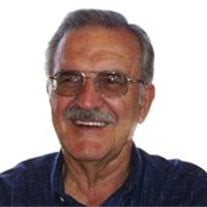 Ralph John Danielson, age 75, of Dassel died Tuesday, January 8, 2013, at the Augustana Lakeside Health Care Center of Dassel. A memorial service will be held on Saturday, January 12, 2013, at 2:00 p.m. at the Evangelical Covenant Church in Dassel, with the Rev. Keith Carlson officiating. A time to gather with the family will be held two hours prior to the service at the church on Saturday. The Johnson Funeral Home in Dassel is in charge of the memorial arrangements. Ralph John Danielson, the son of Oscar Ludvig and Ina Victoria (Davis) Danielson was born on August 19, 1937. He grew up in the Dassel area and graduated from the Dassel High School in 1955. He continued his education and obtained an Industrial Engineering Degree. Ralph was baptized and confirmed in the Christian faith and was presently a member of the Evangelical Covenant Church in Dassel at the time of his death. On December 8, 1956, Ralph was united in marriage to Beverly Gilmer at the Redeemer Lutheran Church in Kingston. Together they made their home above Ralph's Pure Oil Station, which Ralph owned and operated. In 1960, Ralph was employed at Storm Industries for several years before he was employed at 3M Manufacturing in Hutchinson for 30 years. He had worked in many roles, but retired as the Product Manager of Video Cassette manufacturing. Ralph's family was the light of his life, he could often be found cheering on his children and grandchildren at their sporting events. He was an accomplished woodworker, and built kitchen cabinets for his children and worked on several of their homes. He loved to tinker on automobiles and could fix anything. If you broke it, Ralph could fix it. Ralph and Beverly enjoyed spending time at their cabin on Lake Osakis, and in their later years would summer on the shores of Lake Washington and winter in Yuma, Arizona. He always had music playing, and especially enjoyed county music. He is survived by his wife, Beverly of Dassel, children, Mark (Sue) Danielson of Delano, Stephanie (Kevin Huggins) Danielson of Sarasota, Florida, Julie (Punk) Lundeen of Cokato, and Reid (Vicki) Danielson of Dassel, 10 grandchildren, Dustin Heggem, Stesha Heggem, Kim Kelley, Derek Lundeen, Bethany Linder, Kyle Danielson, Mickensi Larson, Jordan Danielson, Brent Danielson, and Brooke Danielson, seven great grandchildren, Wyatt Heggem, Caleb Kelley, Lydia Lundeen, Knox Lundeen, Victoria Linder, Annika Linder, and Landon Larson. He was preceded in death by his parents and his siblings, Virgil Danielson, Dale Danielson, and Joyce Isakson.

Ralph John Danielson, age 75, of Dassel died Tuesday, January 8, 2013, at the Augustana Lakeside Health Care Center of Dassel. A memorial service will be held on Saturday, January 12, 2013, at 2:00 p.m. at the Evangelical Covenant Church in... View Obituary & Service Information

The family of Ralph Danielson created this Life Tributes page to make it easy to share your memories.