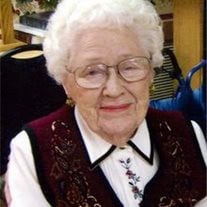 Phyllis A. Carlson, age 98, of Dassel, died Saturday, January 4, 2014, at the Augustana Lakeside Health Care Center of Dassel. A funeral service will be held on Thursday, January 9, 2014, at 11:00 a.m. at the Johnson Funeral Home in Dassel with the Rev. Steven Olson officiating. The interment will be held at the Dassel Community Cemetery following the service. A visitation will be held one hour prior to the service on Thursday at the Johnson Funeral Home in Dassel. Phyllis Alene Carlson, the daughter of Gust and Agnes E. (Peterson) Carlson, was born on April 10, 1915, in Dassel, Minnesota, on the south side of the tracks, in a home near the old Church of Christ. Phyllis was baptized on August 22, 1915, and later confirmed in 1929, at the First Lutheran Church in Dassel. She attended Dassel Elementary and graduated from the Dassel High School in 1933. In 1936, Phyllis attended St. Cloud Teachers College and received her two year teaching degree. Phyllis started teaching in a country school in Stearns County in 1937. She then taught 5th and 6th grade in Pillager, MN from 1938 until 1942. In 1942, she took a position teaching 5th and 6th grade in Howard Lake until 1944. In 1945, she worked for the Department of Treasury processing paperwork so companies could purchase items for government use. She taught 5th grade in Northfield in 1947, and then went to work teaching 5th grade at the Longfellow Elementary in Litchfield from 1947 until 1958. Phyllis went back to the St. Cloud Teachers College to obtain her Bachelor of Science in Education from 1948 until 1950. In 1959, she taught 4th grade at St. Anthony Village until 1961, and then taught Remedial Reading in Anoka from 1961 until her retirement in 1976. Phyllis was an active member of the Trinity Episcopal Church in Litchfield, a 70 year member of the Eastern Star, a member of the Dassel Federated Women's Club from 1976 until 2006, (this club was named in honor her mother, Agnes Carlson.) She was a lifetime member of the Minnesota Historical Society, a member of the Meeker County GAR, where she often worked on Sunday afternoons, and a member of the Dassel Area Historical Society. She was known as the Dassel Historian. Phyllis loved children; she was a teacher, mentor and an advocate for many children. She enjoyed cats, sewing, garage sales and loved to shop. She is survived by her many friends and the thousands of students she has taught and mentored over her lifetime. She was preceded in death by her parents and her two sisters.

Phyllis A. Carlson, age 98, of Dassel, died Saturday, January 4, 2014, at the Augustana Lakeside Health Care Center of Dassel. A funeral service will be held on Thursday, January 9, 2014, at 11:00 a.m. at the Johnson Funeral Home in Dassel with... View Obituary & Service Information

The family of Phyllis A Carlson created this Life Tributes page to make it easy to share your memories.

Send flowers to the Carlson family.