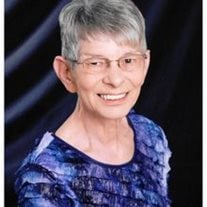 Patricia Ann Juusola, age 72, of Litchfield, died Saturday, October 21, 2017, at the St. Cloud Hospital. A memorial service will be held on Thursday, October 26th, 2017, at 11:00 a.m. at the Gethsemane Lutheran Church in Dassel with Rev. Laurie O'Shea officiating. The interment will be held at the Swan Lake Cemetery following the service. A time to gather with the family will be held on Wednesday evening from 5:00 p.m. to 7:00 p.m. at the Johnson Funeral Home in Dassel and one hour prior to the service on Thursday at the Gethsemane Lutheran Church in Dassel. Patricia Ann (Ziegler) Juusola, the daughter of Clayton and Mabel (Fortier) Ziegler, was born on February 3, 1945, in St. Peter, Minnesota. Pat was baptized at the Belgrade Township Catholic Church near St. Peter and was confirmed at the Sacred Heart Catholic Church in Waseca. Patricia grew up in Mapleton and Waseca before moving to the Litchfield area in 9th grade. She graduated from Litchfield High School in 1962. Upon graduating from high school, Pat worked in the Minneapolis area until she was united in marriage to John Juusola on February 29, 1964, in Cokato, Minnesota. Together they made their home on a dairy farm near Kingston for 29 years. After retiring from dairy farming in 1993, they moved to a farm just 3 miles down the road where they have continued to live. Pat partnered with John, her husband of 53 years, in creating a successful farming operation. She played an active role in all things farming from milking cows, to taking care of the financial records. Pat was also employed for ten years as the manager of the Tom Thumb store in both Dassel and Litchfield. While a manager at Tom Thumb, she touched the lives of many who learned how to get the to-do list done right. Her regulars enjoyed coming in to see her daily. She retired in February 2015 from American Spirit in Howard Lake where she had been employed as a bookkeeper for eleven years. She had been an active member of the Swan Lake Lutheran Church. She served on the church council as the Swan Lake Church representative when the Church became part of Gethsemane Lutheran Church in Dassel. She was presently a member of the Gethsemane Lutheran Church at the time of her death. Pat took great pride in making sure everything looked good on the farm and in the house. She worked hard inside and outside so things looked just right. Whether it was her flower garden, the lawn, or the kitchen. She liked things neat and organized. Pat enjoyed watching Minnesota sports but was partial the Timberwolves especially back when Kevin Garnett played here. Pat and John have belonged to a neighborhood card club for 42 years. They also enjoyed snowmobiling for many years. In more recent years, a trip to the casino every now and then was something they enjoyed doing together as well as the occasional "drive by" vacation. Pat's greatest joy was time spent with her grandchildren. From making pizza hot dish, lighting firecrackers, and driving the 3 wheeler, the love she had for them was evident to anyone who knew her. The gifts she has given her family are beyond measure. The strength, love, and faith she had for each one will be a part of her everlasting legacy. Pat's ability to tell a good story and her contagious positive outlook will be missed by family and friends. She is survived by her husband, John of Litchfield, her daughters, Brenda (Jeff) Gigstad of Burnsville, Julie (Kurt) Schimek of Willmar, and Linda (David) Hoffmann of Starbuck, nine grandchildren, Adam Gigstad (Jill Manzo), Cole Schimek, Ryan Gigstad, Alex Schimek, Tricia Gigstad, Julia Hoffmann, Hannah Hoffmann, Luke Schimek and Andrew Hoffmann. She is also survived by her siblings, Renee' (Bill) Statham of Mankato, Janet Rau of Buffalo, Jim (Marcia) Ziegler of Darwin, and Mike (Bev) Ziegler of Litchfield. She was preceded in death by her infant son, Bradley John Juusola, her parents, Clayton and Mabel Ziegler, a brother, Mark Ziegler, and father and mother-in-law, Arnold and Emma Juusola and sister-in-law, Sally (Norman) Haag.

Patricia Ann Juusola, age 72, of Litchfield, died Saturday, October 21, 2017, at the St. Cloud Hospital. A memorial service will be held on Thursday, October 26th, 2017, at 11:00 a.m. at the Gethsemane Lutheran Church in Dassel with Rev. Laurie... View Obituary & Service Information

The family of Patricia Ann Juusola created this Life Tributes page to make it easy to share your memories.