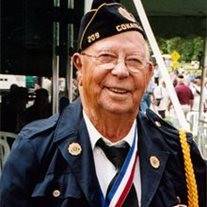 Orville Roy Stewart, age 96, of Dassel, formerly of Cokato, died Thursday, March 5, 2015. A funeral service will be held on Tuesday, March 10, 2015, at 10:30 a.m. at the Evangelical Covenant Church in Dassel with Rev. Keith Carlson officiating. The interment will be held at the Cokato City Cemetery following the service. A visitation will be held one hour prior to the service on Tuesday morning at the Evangelical Covenant Church in Dassel. The Military Honors will be conducted by the Cokato American Legion Post #209. Orville Roy Stewart, the son of James and Ruth (Nichols) Stewart was born on January 12, 1919, in Kerkhoven, Minnesota. Orville grew up in Stanley, Wisconsin. Orville attended school to the 8th grade in Stanley and helped on the family farm. Orville was inducted into the United States Army and served proudly overseas during World War II. He was a Sergeant Military Policeman, and later a Mechanic and Master Welder. Orville had been an active member of the Cokato American Legion Post #209 for over 65 years. On February 10, 1946, Orville was united in marriage to Marion June Wiethoff in Stanley, Wisconsin. Together they made their home in Cokato, where Orville worked as a Mechanic for several years before purchasing his own farmstead. Orville and Marion worked the land and milked cattle together for over 50 years. In 2008, they moved to Dassel where they made their home. He was an active member of the Walker United Methodist Church in Howard Lake until its closing and has been a member of the Evangelical Covenant Church in Dassel. He enjoyed the times he shared with his son, grandchildren, great grandchildren, brother and family and friends. He was a talented mechanic who enjoyed restoring antique tractors and other farm equipment. Orville was a talented woodworker and made many wood-working pieces with his wife, Marion. They enjoyed many travels together, including wintering in Arizona. Orville is survived by his son, James (Irene) Stewart of Dassel, two grandchildren, Brent E. (Kimberly) Stewart of Darwin, and Bonnie Nelsen of Cokato, three great grandchildren, Dylan, Marissa, and Lacie, brother, Norman Stewart of Cokato, and several nieces, nephews, and other relatives. He was preceded in death by his wife, Marion on February 5, 2011, an infant son, Larry, and his parents, a sister-in-law, Lucy Stewart, and a sister, June Hillmyer and her husband, Lloyd "Bud" Hillmyer.

The family of Orville Roy Stewart created this Life Tributes page to make it easy to share your memories.

Send flowers to the Stewart family.