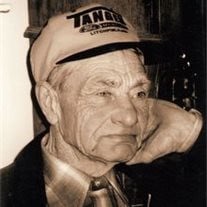 Orville Emil Krueger, age 93, of Hutchinson, died Friday, March 24, 2017, at the Prairie Senior Cottages in Hutchinson. A funeral service will be held on Tuesday, March 28, 2017, at 11:00 a.m. at the Gethsemane Lutheran Church in Dassel with the Rev. Carolyn Pflibsen officiating. The interment will be held following the service at the Lake Arvilla Cemetery in rural Dassel. A visitation will be held one hour prior to the service on Tuesday at the Gethsemane Lutheran Church in Dassel. The Johnson Funeral Home of Dassel is in charge of the funeral arrangements. Orville Emil Krueger, the son of Gustave and Emma (Miller) Krueger, was born on July 11, 1923, in Wykoff, Fillmore County, Minnesota. He attended school in the Gibbon area. Orville was baptized and confirmed in the Lutheran faith and was presently a member of the Gethsemane Lutheran Church in Dassel at the time of his death. On April 13, 1947, Orville was united in marriage to Alice Schiro at Peace Lutheran Church in Cosmos. Together they made their home for a short time in Stewart before moving to Dassel and then Mission, Texas. Orville and Alice moved back to Dassel in 1952. In 2011, Orville moved to live with his daughter in Texas where he lived until 2014, when he moved back to Dassel. In 2015, Orville moved to the Prairie Senior Cottages in Hutchinson, where he has resided since. Orville had been employed by the Universal Lab Ergot Plant, Storm Industries, and as a garbage collector by Smith Sanitation in Dassel. Orville was a humble, soft spoken man who always listened to others before he spoke. He loved his children, grandchildren, and great grandchildren deeply. Holidays were special to Orville, they were the times that he could bring his family back together. He enjoyed bird watching, reading a good book or could often be found in his garden, taking care of his strawberries and vegetables. He spent time traveling by train through Europe and Germany with some of his children. He also enjoyed taking car rides through the countryside watching the crops grow, the sunsets and natures beauty. He enjoyed many types of vehicles but always had a tender spot in his heart for a Ford. Orville is survived by his children, RuthAnn Krueger of Cokato, Mary (Roger) Skoog of Hutchinson, Janet Krueger of Cokato, Judy (Jerry) Peterson of Georgetown, Texas, Eugenia (Glen) Rix of Hutchinson, Sharon Krueger of Annandale, Carol (Russ) Hayes of Maple Grove, Barb (Dennis) Schneider of Zimmerman, Sue McGary of Crystal, Paulette Krueger of Maple Grove, Becky (James) Mathews of Glencoe, John Krueger of Cokato, Joel Krueger of Cokato, Paul (Abby) Krueger of Maple Grove, Mark (Cheryl) Krueger of Indiana, daughter in law, Lotus Krueger of Hutchinson, 19 grandchildren 23 great grandchildren, and several nieces, nephews, and other relatives and friends. He was preceded in death by his wife, Alice, sons, Daniel Krueger and Dave Krueger, granddaughter, Ariel Schneider, son-in-law, Tom McGary, parents, and two brothers, Melville Krueger and Luverne Krueger

Orville Emil Krueger, age 93, of Hutchinson, died Friday, March 24, 2017, at the Prairie Senior Cottages in Hutchinson. A funeral service will be held on Tuesday, March 28, 2017, at 11:00 a.m. at the Gethsemane Lutheran Church in Dassel with... View Obituary & Service Information

The family of Orville Emil Krueger created this Life Tributes page to make it easy to share your memories.

Send flowers to the Krueger family.