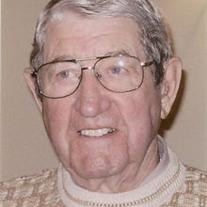 Norman Loven, age 85, of Grove City, formerly of Dassel, died Sunday, July 29, 2012, at his home in Grove City. A funeral service will be held at 2:00 p.m. on Friday, August 3, 2012, at the Trinity Lutheran Church in Grove City with the Rev. Jean Ohman officiating. The inurnment will be held following the service at the First Lutheran Cemetery in Grove City. A time to gather with family will be held on Thursday from 4:00 p.m. to 7:00 p.m. at the Trinity Lutheran Church in Grove City and one hour prior to the service at the church on Friday. The Johnson Funeral Home in Dassel is in charge of the funeral arrangements. Norman Douglas Loven, the son of Herman and Anna (Monson) Loven was born on December 4, 1926, in Grove City, Minnesota. He grew up in the Grove City area until his parents moved to Minneapolis when he was a child. They moved back to Grove City, where he graduated from the Grove City High School. Norman was baptized and confirmed in the Lutheran Faith and had been a member of the Trinity Lutheran Church in Grove City. He had served on the First Lutheran Church Board for several terms. Norman served in the United Stated Army in the Japan Occupation Forces and served from March on 1945 until October of 1946. On May 7, 1944, Norman was united in marriage to Marilyn Althea Holm at the Little Brown Church in the Vale at Nashua, Iowa. Together they made their home in Grove City until 1965, when they moved to California and lived there for a short period of time, moving to Mound in 1966. Norman worked as a Sales Rep for Bartley Supply in Mound and later SD McCollough. In 1970, Norman purchased the Our Own Hardware Store in Dassel and moved to Dassel in 1971. He owned and operated the hardware store until he sold the business in 1986 and moved to St. Cloud. In 1990, Marilyn and Norman moved back home to Grove City, where he has lived since. He enjoyed spending time with his family and friends, he always could find an acquaintance that he knew wherever he went. He enjoyed hunting, fishing, and golf. They traveled in their RV to numerous destinations, from Alaska to Florida and wintered in both Arizona and Florida. He served on the Grove City School Board, the Grove City Fire Department, and for many years was a Funeral Director in Grove City. He is survived by his children, Cheryl (Laural) Stafford of Grove City, Jeff (Diane) Loven of Dassel, four grandchildren, Jim (Karen) Stafford, Scott (Nyla) Stafford, Jeremy Loven and Kyle Loven, six great grandchildren, Sean Stafford, Melissa Hjelle, Brandon Stafford, Shaylene Stafford, Holden Stafford, and Savannah Stafford. He is also survived by a special friend, Hazel Wittenberg of Litchfield and a brother-in-law, Robert Holm of Arizona. He was preceded in death by his wife, Marilyn, son, Peter, parents, and a brother, Donald.

The family of Norman Loven created this Life Tributes page to make it easy to share your memories.

Send flowers to the Loven family.