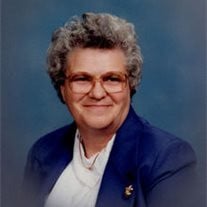 Norma Virginia Abbott, age 86, passed away on April 5, 2013 at the Mille Lacs Health System in Onamia, Minnesota. Norma was born on October 4, 1926, the daughter of Alvin and Dorothy (Brown) Miller, in Lisbon, North Dakota. The family later moved to the Dassel area. Norma was confirmed at the Covenant Church and graduated from Dassel High School in 1945. On October 5, 1946, Norma was united in marriage to Thomas Abbott, Jr. They made their home south of Dassel on the Abbott family dairy farm and were blessed with four children, Dan, Dayna, Sue, and LuAnn. Norma was an active, life-long member of the Evangelical Covenant Church and the Collinwood Club. She was also involved with the Women's Auxiliary and 4-H. For many years she was a volunteer driver and a volunteer at the Cokato Manor receiving the Volunteer of the Year Award many times. Family always came first with Norma. She was a devoted, loving and caring wife, mother, grandmother, great-grandmother, daughter, sister, daughter-in-law, neighbor and friend. Norma was a hard-working farm wife who always had time to help others. There wasn't a day that went by that she did not do something for someone else. Over the years, Norma was employed at the Coffee Cup Café, Green Giant, and the Dassel Lakeside Home until her retirement. Norma enjoyed music, socializing with friends, picnics and traveling. Her travels included Alaska, Canada, the East and West coast and many other trips. She especially enjoyed visiting her daughter Sue in New Mexico and her son Dan in Washington. She was an excellent cook and loved to share her wonderful meals and baked goods with everyone. Norma will be greatly missed and will be remembered for her kindness and generosity. The family would like to thank the Mille Lacs Health System, Litchfield Hospital, Buffalo Hospital, Heritage Place, Dassel Lakeside Assisted Living and all the wonderful caregivers she had during her illness. Norma is survived by her children, Daniel (Denora) Abbott, of Puyallup, WA, Dayna (Bob) McKimm, of Brownton, Susan Moe, of Cokato, and LuAnn (Gus) Weseloh of Dassel, ten grandchildren, eighteen great-grandchildren, sister, Audrey (Gerald) Euerle, of Litchfield, and sister-in-law, Jean Carlson of Hutchinson. Norma was preceded in death by her husband, Thomas Jr., her parents Alvin and Dorothy, in-laws, Thomas Sr. and Nina, an infant daughter, Gloria, brothers Clyde Miller and Hubert Miller, and a grandson-in-law, Todd Pooler. A celebration of life service will take place on Monday, April 15, 2013 at 2:00 p.m. at the Evangelical Covenant Church in Dassel, Minnesota with Reverend Keith Carlson officiating. There will be a one hour visitation prior to the service. On Sunday, April 14, 2013, there will be a visitation from 5-7 p.m. at the Johnson Funeral Home. Interment will follow after the service at the Dassel Community Cemetery.

The family of Norma Abbott created this Life Tributes page to make it easy to share your memories.

Send flowers to the Abbott family.