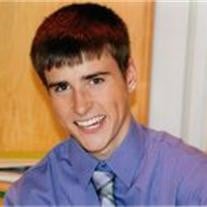 Mitchell James Grierson, age 19, of Dassel, died Sunday, February 17, 2013, in Winona, Minnesota. A funeral service will be held on Thursday, February 21, 2013, at 11:00 a.m. at Gethsemane Lutheran Church in Dassel with the Rev. Steven Olson officiating. The interment will be held at the Dassel Cemetery following the service. A visitation will be held on Wednesday evening from 4:00 p.m. to 7:30 p.m. at the Johnson Funeral Home in Dassel with a one hour visitation prior to the service at the church on Thursday. Mitchell James Grierson, son of Pamela Jo (Moores) Boerboom and James John Grierson Jr., was born at Methodist Hospital in St. Louis Park on January 17, 1994. Mitchell was baptized at Maple Grove Lutheran Church on June 26, 1994, and confirmed at Gethsemane Lutheran Church on October 4, 2009. He had traveled on a mission trip to Cairo, Illinois, with the Gethsemane Lutheran Youth Group. Mitchell made his home with his family in Maple Grove until 1997 when they relocated to Glendale, Arizona, until 2000. In 2000, they moved back to Maple Grove where they resided until 2006. In 2006, they moved to Dassel where he has resided since. Mitchell attended Highland Lakes Elementary in Glendale, Arizona, Weaver Lake Elementary School in Maple Grove, and Dassel Cokato High School, which he graduated from on June 3, 2012. In the fall of 2012, Mitchell became a student at Winona State University and was pursuing a degree in Mass Communications. Mitchell loved and lived life to the fullest. "Carpe Diem" was his motto. He loved spending time with his family and countless friends. He loved animals, especially cats. His favorite activities included snowboarding, wakeboarding, snowmobiling, ice fishing, playing baseball, hanging out on the lake and having bonfires with his buddies. Most of all he enjoyed spending time with his girlfriend, Jessica. Mitchell was a funny handsome boy with a smile on his face and a twinkle in his eyes. Seldom did you see Mitchell without one of his favorite hats on. Mitchell is survived by mother, Pamela (Marty) Boerboom of Dassel, father, James (Susan) Grierson Jr. of Marco Island, Florida, brother, Cody Grierson of Dassel, step-brother, Alex Boerboom of Dassel, step-sister, Danielle Boerboom of Dassel, special girlfriend, Jessica Mattson of Dassel, maternal grandmother, Jo Moores of Brainerd, maternal grandfather, Arne (Lisa) Moores of Brainerd, and paternal grandfather, Jim Grierson Sr. of Marco Island, Florida, many aunts, uncles, and cousins. He was preceded in death by his paternal grandmother, Sally Grierson.

The family of Mitchell Grierson created this Life Tributes page to make it easy to share your memories.

Send flowers to the Grierson family.