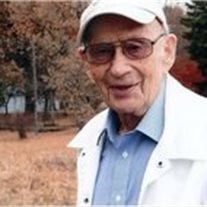 Millard Harris Nelson, age 99, of Watkins died Friday, July 21, 2017, at the Hilltop Health Care Center. A celebration of life will be held from 4:00 p.m. to 7:00 p.m. with a service being held at 7:00 p.m. on Thursday Evening, July 27, 2017, at the Johnson Funeral Home in Dassel. The interment will be held AT 9:00 A.M. on Friday morning at Saint Anne's Catholic Cemetery in Kimball. Millard Harris Nelson, the son of Willie and Alice (McKinzie) Nelson was born on May 1, 1918, in North Kingston Township, Meeker County, Minnesota. Millard attended school and graduated from Annandale High School in 1935. He continued his education and received his teachers certificate from St. Cloud Teacher College. His first teaching job was at the country school near Annandale. Millard then taught at a country school near St. Michael, where he met Shirlee. He then went on to teach at Earle Brown Elementary in Brooklyn Center. On August 23, 1941, Millard was united in marriage to Shirlee Ione Marie Breuninger at St. Bridget's Catholic Church in North Minneapolis. On June 19, 1942, Millard was inducted into the United States Coast Guard. Millard and Shirlee made a moved to Oakland, California, while he was in the service. He served as a Pharmacist's Mate on the USS Callaway in the Pacific Theater during WWII and was discharged on November 8, 1945. Upon his completion of duty, Millard returned home and continued his education by attending St. Cloud University. For a short time after the service Millard was employed as a nurse at St. Barnabas Hospital in Minneapolis. He returned to teaching and taught in the South Haven School District before accepting a position as a 6th grade teacher in Buffalo. He later became the Principal before returning to the classroom and becoming the Band Director for several years. In 1957, Millard was employed by the St. Cloud Veterans Hospital where he was a Recreational Music Therapist, retiring in 1980. He organized a Drum and Bugle Corp and an Orchestra of patients at the VA Hospital. After retiring from the VA Medical Center, Millard returned to teaching and taught for several years as a substitute teacher for the Kimball School District. Millard had many talents, he loved music, growing flowers, reading, writing poetry, and building bird houses and lean-tos. He was a founder of the South Haven VFW Post 7332, and was a lifetime member of the Ketchikan VFW Post 4352 in Ketchikan, Alaska. He served as Mayor of South Haven for several years and was one of the founders of the South Haven Volunteer Fire Department, he taught firearm safety courses and snowmobile safety training for twenty years. Millard was a very talented musician and had been a member of several polka bands. He was founding member of the Polka Dots, the Four Winds, was a member of a band onboard the USS Callaway who would play for the wounded soldiers. He would often sit in and play with the Six Fat Dutchmen. He is survived by his children, Terry (Patty) Nelson of Kimball, Tim (JoAnne) Nelson of Rockford, Sheree Lee (Jim Schmitz) of South Haven, and Mike (Kris) Nelson of South Haven, 14 grandchildren, 16 great grandchildren and four great great grandchildren. He was preceded in death by his wife, Shirlee, his daughter, Diane Greely, parents, and a sister, Bernice Rose.

The family of Millard Harris Nelson created this Life Tributes page to make it easy to share your memories.