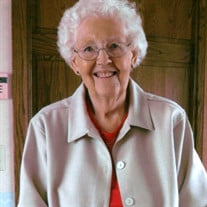 Mildred Louise Anderson, age 96, of Cokato, formerly of Dassel, died Wednesday, December 19, 2018, at the Cokato Manor. A memorial service will be held at 11:00 am on Saturday, December 29, 2018, at the Elim Mission Church in Cokato with the Rev. Mike Newsom officiating. The interment of the urn will be held in the spring at the Steelesville Cemetery in rural Dassel. There will be a time to gather with the family one hour prior to the service at the Elim Mission Church in Cokato. The Johnson Funeral Home in Dassel is in charge of the funeral arrangements. Mildred Louise Johnson was born April 12, 1922, to Ludvick and Anna (Peterson) Johnson in Meeker County, Minnesota. She attended Steelsville Country School and Dassel High School. Her first job was doing house work on a farm for $3.00 a week. Later she worked at the Litchfield Produce Co. which paid thirty cents an hour. Millie married Arthur Anderson on September 27, 1941, at the age of 17 and moved to Hibbing MN; where Art worked for the Great Northern Railroad building bridges on the Mesiabi Division. Art was drafted in July of 1942 and Millie worked at various jobs in Minneapolis, later joining him in military base towns in Texas, Florida and Virginia, where she found work in the area as a hotel clerk and housekeeper. When Art left for overseas Millie came home to spend the rest of the war years with her Mother on the family farm near Dassel. Their first child, Kathryn Ann, was born on February 28, 1944. The family grew with the addition of Eileen Louise, Shirley Jean and Loren Arthur, moving to a farm in the Lamson area and lived there for 47 years. Art, Millie and family were very involved in the Lamson Ev. Free Church and Mom held many different leadership roles. Millie was an involved farm wife and a very hard worker. She had a large garden, canned and froze the produce and raised hundreds of chickens. Mom enjoyed entertaining and hosted guests frequently. For many seasons she worked during the corn pack for the Northland Canning Co. She was also well known in Dassel where she worked at Holm Brothers Hardware Store for 22 years. In 1994, Art and Millie moved to Cokato and actively served in their new church, Elim Mission. Mom had a heart to help others as evidenced by her volunteering for Meals on Wheels, the Food Shelf Ministry, and reading to nursing home residents. She enjoyed quilting, embroidering, crocheting, and sewing for mission projects. She made a quilt for each child, her 10 grandchildren and crocheted many baby blankets. Even in her 92nd year she faithfully attended Women's Prayer, Dorcas, and volunteered at the Dassel Lakeside Home answering the phones. She enjoyed reading, still using the library at age 93 and delighted in her summer flower pots. She loved spending time with her family and was a sweet, devoted Mother, Grandmother and Christian role model, leaving our family with a strong Christian heritage. Millie was preceded in death by husband, Arthur, two great-grandchildren, Brook and Sydney Nyquist, sister, Eleanor Johnson, brothers Gustaf, Lawrence, and Vernon Johnson and son-in-law, Maurice Nyquist. She is survived by Children: Kathryn Nyquist, Eileen (David) Harman, Shirley (Greg) Matuseski and Loren (Barbara) Anderson. Grandchildren: Brent (Amy) Nyquist, Kristin (Eric) Dahlke, Kerry (Joshua) Schimmel, Mark (Kari) Matuseski, Anna (Edward) Smith, Jason (Courtney) Anderson, Michelle Anderson, Kati Matuseski, Kelsey (Brennan) Gustafson, Kyle Matuseski. Great-grandchildren: Evan, Eli, Ian, and Ariel Schimmel, Regan and Tyler Nyquist, and Amelia Gustafson.

Mildred Louise Anderson, age 96, of Cokato, formerly of Dassel, died Wednesday, December 19, 2018, at the Cokato Manor. A memorial service will be held at 11:00 am on Saturday, December 29, 2018, at the Elim Mission Church in Cokato with the... View Obituary & Service Information

The family of Mildred Louise Anderson created this Life Tributes page to make it easy to share your memories.