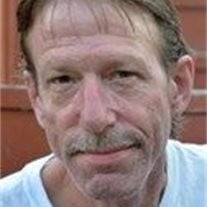 Michael D. Reynolds, 51 Jan. 3, 1966 - May 2, 2017 Michael Dean Reynolds, 51, long-time resident of Brainerd, MN, passed away peacefully in the company of family and care of St. Croix Hospice at Lakeside Health Care Center of Dassel, MN on May 2, 2017 after a recent diagnosis of cancer. Born January 3, 1966 in Omaha, Nebraska to Gary D. and Roswitha M. Reynolds, as an Air Force family, they lived in Japan, Germany, and Ohio before settling in Austin, TX in 1980 where Michael attended Sydney Lanier High School until 1985. He and his twin brother Mark arrived in Brainerd, MN in 1987. Michael and Sherri Turner of Brainerd had a son Brandyn and married in 1992. They later divorced. Except for a brief stay in Portland, OR to attend college between 2006-2009, Michael resided in the Brainerd area for more than 25 years. He worked for a number of years at Lexington Manufacturing in Brainerd and most recently at Fulfillment Distribution Center in St. Cloud, MN. Michael was deeply compassionate and empathetic to those in need and often gave much of himself in-service to others. He enjoyed learning new technology and history, a connoisseur of reggae and classic rock music, was an avid bicyclists, outdoor and fishing enthusiast, and devoted Minnesota Vikings fan. 'One-day-at-a-time' guided much of his outlook on life. Michael is survived by his ex-wife Sherri (Larry), son Brandyn (Alyssa), grandson Ryken, father Gary (Marilyn), mother Roswitha, and brothers Dennis (Carolyn), Mark, and Chris. A sincere appreciation goes to the caring staff of St. Croix Hospice and Lakeside Health. Services were provided by Johnson Funeral Home of Dassel, MN. Rest easy dear brother. We love you and will see each other again. - See more at: http://www.legacy.com/obituaries/sctimes/obituary.aspx?n=michael-d-reynolds&pid=185381864#sthash.boJ5fgPw.dpuf

The family of Michael D Raynolds created this Life Tributes page to make it easy to share your memories.

Send flowers to the Raynolds family.