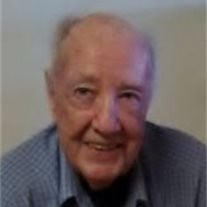 Merlyn Lewis McStotts, age 91, of Cokato, died Wednesday, April 27, 2016, at the Cokato Manor. A funeral service will be held on Monday, May 2, 2016, at 3:00 p.m. at the Evangelical Covenant Church in Dassel with the Rev. Keith Carlson officiating. The interment will be held at the Dassel Cemetery following the service. A one hour visitation will be held prior to the service on Monday at the Evangelical Covenant Church in Dassel. The Johnson Funeral Home in Dassel is in charge of the funeral arrangements. Merlyn Lewis McStotts, the son of Clarence and Alma (Gordon) McStotts, was born on August 1, 1924, in Ellsworth Township, Meeker County Minnesota. He grew up in the Ellsworth area and attended Litchfield High School for his education. He later attended technical school for welding. Merlyn was baptized and later confirmed in the Christian faith. On August 19, 1955, Merlyn was united in marriage to Evelyn Casper in St. Paul, Minnesota. Together they made their home in Minneapolis until 1958, when they moved to the north edge of Dassel. In 2005, Merlyn moved to Cokato where he has since made his home. He was employed for 30 years as a welder for DeZurik Inc. in Sartell. Merlyn was a quiet, kind generous and caring man to family, friends, and strangers. He trained many breeds of hunting dogs, from Springer Spaniels, Coon Hounds, Pointers, and Labs. He liked to hunt for pheasants and ducks in the fall. Merlyn was an avid sports fan and enjoyed cheering for the Vikings, watching NASCAR, along with many other sporting events. He loved to play solitaire and watch game shows, especially, "Let's Make A Deal". He was a news hound and always kept up to date on what was happening around the country by reading the newspaper and watching numerous new reports. He enjoyed politics and debating about current events and the impact they are having on the country. Merlyn is survived by his son, Terrence (Tina) McStotts of Cokato, four grandchildren, Matt McStotts and a special friend, Emiko Winans of St. Cloud, Daniel (Kimberly) McStotts of Waverly, Eric McStotts of Cokato and Amy McStotts of Atwater, great grandchildren, Alyson McStotts, Kaitlyn Rangel, Jared Rangel, Kailey Rangel and a great grandson due in August. He was preceded in death by his wife, Evelyn on December 23, 1992, a son, Randy McStotts on February 20, 2014, parents, Clarence and Alma McStotts, and a sister-in-law, Charlotte Vetter.

Merlyn Lewis McStotts, age 91, of Cokato, died Wednesday, April 27, 2016, at the Cokato Manor. A funeral service will be held on Monday, May 2, 2016, at 3:00 p.m. at the Evangelical Covenant Church in Dassel with the Rev. Keith Carlson officiating.... View Obituary & Service Information

The family of Merlyn Lewis McStotts created this Life Tributes page to make it easy to share your memories.

Send flowers to the McStotts family.