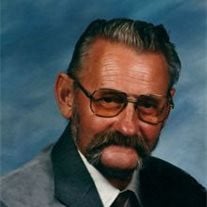 Melvin Carl Kuehn, age 80, of Dassel, died on Thursday, January 29, 2015, at t h e VA Medical Center in St. Cloud. A funeral service will be held at the Zion Lutheran Church in Litchfield on Tuesday, February 3, 2015, at 11:00 a.m. with interment at the Dassel Community Cemetery following the service. There will be a visitation one hour prior to the service at the Zion Lutheran Church in Litchfield. Military honors will be performed by the Litchfield Military Honor Guard. Melvin Carl Kuehn was born on November 24, 1934, in Echo, Minnesota in Yellow Medicine County to Gustav and Mildred (Rhode) Kuehn. He was baptized and confirmed at Peace Lutheran Church in Echo. Melvin attended country school in Yellow Medicine County, where he lived and grew up. He entered the U.S. Army on August 14, 1955, and served until 1958. He was stationed at Fort Sill, Oklahoma, and served during the Korean Conflict. In November of 1959, Melvin was united in marriage to June Welch at the Peace Lutheran Church in Echo. Together they moved to St. Paul where Melvin worked as a construction crew foreman. In 1963, they moved to Wood Lake, Minnesota. He worked in construction his whole life. Melvin was past Commander of VFW Post 2818 of the Litchfield. He was a member of the VFW & American Legion Honor Guard Post 204 of Litchfield. On August 26, 1989, he was united in marriage to Doris Von Loh at the Gethsemane Lutheran Church in Dassel. Together they made their home on the North Shore of Lake Washington. The Lord took her home on October 5, 1993. Melvin is survived by his son, David (Peggy) Kuehn of Redwood Falls, six grandchildren, 4 great grandchildren, siblings, Elaine Schlenner of Woodbury, Mavis (Don) Byers of Austin, Murl (Lynn) Kuehn of Echo, Marlin (Mary) Kuehn of Youngsville, North Carolina; Marlice (Gary) Halvorson of Youngsville, North Carolina; Marlene (Dennis) Ryks of Renville, and Marvin (Vicky) Kuehn of Redwood Falls. He was preceded in death by his wife, Doris, his daughter, Lori Kuehn Williams, his parents, grandson, Seth Kuehn, and a great grandson, Parker Tisue.

The family of Melvin Carl Kuehn created this Life Tributes page to make it easy to share your memories.

Send flowers to the Kuehn family.