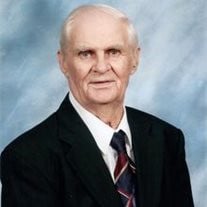 Melvin Frederick Grochow, age 95, of Dassel, died Wednesday, March 13, 2013, at the Augustana Lakeside Health Care Center of Dassel. A funeral service will be held on Saturday, March 16, 2013, at 2:00 p.m. at Gethsemane Lutheran Church in Dassel with the Rev. Steven Olson officiating. The interment will be held at the Dassel Community Cemetery following the service. A visitation will be held from 5:00 p.m. to 8:00 p.m. on Friday evening and one hour prior to the service on Saturday at Gethsemane Lutheran Church in Dassel. The Johnson Funeral Home in Dassel is in charge of the funeral arrangements. Melvin Frederick Grochow, the son of Paul and Alvina (Schauer) Grochow, was born on July 2, 1917, in Transit Township, Sibley County, Minnesota. Melvin was baptized as an infant and later confirmed as a youth, both at St. John's Lutheran Church (Mountville) in Gaylord, Minnesota. On June 5, 1953, Melvin was united in marriage to Lorayne Anderson at the First Lutheran Church in Dassel, Minnesota. Melvin and Lorayne made their home in Dassel and shared 41 years of marriage. This marriage was blessed with five children. A man with strong Christian faith, Melvin was a member of Gethsemane Lutheran Church in Dassel, Minnesota. Melvin was a hard worker and held employment in many trades, including a farmer, hauling milk, painter, waste collector, and cemetery caretaker. Melvin enjoyed playing cards, shaking dice, hunting, bowling, fishing, and tinkering. He enjoyed sports and was an avid baseball fan. Melvin cherished the time spent with his family and friends and will be greatly missed. When he needed full-time care, Melvin became a resident of the Augustana Lakeside Health Care Center. He passed away surrounded by family on March 13, 2013, at the age of 95 years, 8 months and 13 days. Blessed be his memory. Melvin is survived by his children, David (Donna) Grochow of Dassel, Dean Grochow of Dassel, Donna (Scott) Drew of Dassel, Dale (Michele) Grochow of Dassel, and Duane (Katherine) Grochow of Cokato; eight grandchildren, Brandon Grochow, Melanie (Chris) Gross, Melissa (Josh) Hillmyer, Ryan Drew, Zachary and Michaela Grochow, and Kayla and Grant Grochow; three great grandchildren, Brayden and Kinslee Gross and Baby Hillmyer. He was preceded in death by his loving wife, Lorayne; parents, Paul and Alvina Grochow; and sisters, Luella Bauer, Evelyn Opitz, and Doloris Abraham.

The family of Melvin Grochow created this Life Tributes page to make it easy to share your memories.

Send flowers to the Grochow family.