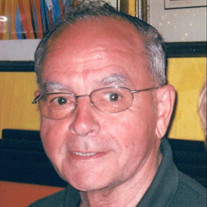 Melvin William Anderson, age 89, of Minnetonka, formerly of Dassel, died Monday, October 25, 2021, at Cherrywood Pointe of Minnetonka. A memorial service will be held on Monday, November 8, 2021, at 11:00 a.m. at the Peace Lutheran Church in Hutchinson with Pastor Layton Lemke officiating. The interment of the urn will be held at the Lake Arvilla Cemetery in rural Dassel. There will be a time to gather with the family one-hour prior to the service at Peace Lutheran Church on Monday, November 8, 2021. Melvin William Anderson, the son of Hugo and Anna Lucille (Schreiner) Anderson, was born on September 15, 1932, in Dassel, Minnesota. Melvin grew up in the Dassel area where he attended school. In 1953, Melvin was inducted into the United States Army and proudly served his country. On August 25, 1956, Melvin was united in marriage to Arlette Eimer at the St. John’s Lutheran Church in Aitkin. Together they made their home in Cokato for several years before they moved to Hutchinson. In 1966, Melvin and Arlette purchased a farm in Collinwood township where they made their home and raised their three daughters. Melvin was employed by 3M Corporation in Hutchinson from February 16, 1959, until the summer of 1991 when he retired after 32 years of dedicated employment. In the fall of 2017, Melvin and Arlette moved to Minnetonka where he has resided since. He loved to spend time with his family for holidays and special events. As a dedicated dad, Mel spent many hours patiently listening to recital performances. He loved his children, grandchildren, and great grandchildren with his whole heart. He enjoyed working around the farm and mowing the lawn on his John Deere Lawn Tractor. Melvin and Arlette enjoyed jumping into the car to drive around the countryside. Melvin and Arlette had visited South Korea, China, and other countries around the world, but their favorite destination was the Bahamas with their children and families. They enjoyed many summer days and nights at Fritz’s Resort in Nisswa. Melvin was a kind, generous, and gentle man who will be missed by his family and friends. Melvin is survived by his children, Sheryl Shark of Beverly Hills, CA; Shelly (Terry) Nelson of Plymouth, Jillaine (Jeff) Savage of Edina, five grandchildren, Elizabeth (Andrew) Richardson, Ashley Nelson, Brady Nelson, Zach Savage, and Alex Savage, three great grandchildren, William Miller, Scarlett Richardson and Penelope Richardson, siblings, Emily Mackie of San Leandro, CA, Fay Shanholtzer of Bakersfield, CA, Gilbert (Jeanette) Anderson of Dassel, Howard Anderson of Fort Myers, FL, Orville (Jane) Anderson of Dassel, Percy (Mary) Anderson of Hutchinson, Ralph (Karee) Anderson of Dassel, and Linda (Steve) Madson of Show Low, AZ. He is also survived by several nieces, nephews, and numerous friends. He was preceded in death by his wife, Arlette Anderson, his parents, Hugo and Anna Lucille Anderson, siblings, Irma Peterson, Lois Paradise, Goldie Omdahl and his twin brother, Marvin Anderson.

Melvin William Anderson, age 89, of Minnetonka, formerly of Dassel, died Monday, October 25, 2021, at Cherrywood Pointe of Minnetonka. A memorial service will be held on Monday, November 8, 2021, at 11:00 a.m. at the Peace Lutheran Church in... View Obituary & Service Information

The family of Melvin William Anderson created this Life Tributes page to make it easy to share your memories.