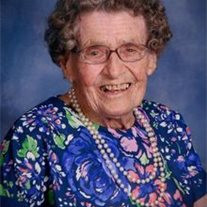 Melba Virginia Marie Anderson, age 100, of Dassel died Tuesday, December 10, 2013, at the Augustana Lakeside Health Care Center of Dassel. A funeral service will be held on Saturday, December 14, 2013, at 2:00 p.m. at the Stockholm Lutheran Church, rural Cokato with the Rev. Mark Little officiating at the service. The interment will be held at the church cemetery following the service. A visitation will be held on Friday from 4:00 p.m. to 7:00 p.m. at the Johnson Funeral Home in Dassel and one hour prior to the service at the church. Melba Virginia Marie Peterson Anderson was born April 11, 1913 in Cokato, MN to Joseph and Edith (Johnson) Peterson. She was baptized and confirmed at Gethsemane Lutheran Church, Dassel. She grew up on a farm on the north shore of Collinwood Lake, attended the Collinwood School, and graduated from Cokato High School in 1930. After teacher's training in Cokato, she taught for 5 years at the 2 room Stockholm School, teaching grades 1– 4. On May 21, 1936 she was married to Verner Nils Anderson at Gethsemane Lutheran Church. They first farmed north of Dassel, then near Lake Mary south of Howard Lake, before finally purchasing the Anderson family farm at Lamson in 1940. She and Verner worked side by side in their farming operation until his passing in April of 1982. Melba enjoyed cooking, baking, sewing, crocheting, gardening and raising flowers. She often shared baked goods, strawberries which she had picked and cleaned, potato sausage, as well as her roses and gladiolas. Melba loved the Lord and her Stockholm Church Family. She played the organ, directed the choir, taught Sunday School, and Vacation Bible School. She was active in the women's organizations, and played piano for the brotherhood. She particularly enjoyed studying the word, attending the Sunday morning Bible Studies and leading her circle Bible Study for many years. When she moved into Dassel, she continued to enjoy attending Bible Studies at Lakeside Apartments and Dassel Lakeside Healthcare. As she advanced in years she continued her daily devotions and she remained a faithful prayer warrior. Melba passed away on Tuesday, December 10, 2013 at the Dassel Lakeside Healthcare Center at the age of 100 years, 7 months and 29 days. Survivors include her son J. David and his wife, Karen of Dassel, grandson Daniel (Trish) Anderson of St. Louis, MO, granddaughter, Karyl (Jim) Schultz of Inver Grove Heights, MN, two great grandchildren, Brittany Schultz and Noah Schultz, as well as her two sisters-in-law, Verna Peterson and Marian Peterson, nieces, nephews, and many friends. She was preceded in death by her parents Joseph and Edith, and her brothers J. Homer Peterson, and Ralph W. Peterson.

The family of Melba Virginia Marie Anderson created this Life Tributes page to make it easy to share your memories.