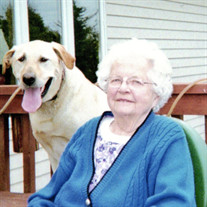 Mary R. Leukuma, age 90, of Dassel, died Monday, December 23, 2019, at the Cokato Manor. A funeral service will be held on Tuesday, December 31, 2019, at 11:00 a.m. at the Evangelical Covenant Church in Dassel with Pastor Darren Olson officiating. The interment will be held at Fort Snelling National Veterans Cemetery in Minneapolis on the morning of Thursday, January 2, 2019. There will be a visitation one hour prior to the service on Tuesday, December 31, 2019, at the Evangelical Covenant Church in Dassel. Mary Ruth (Olson) Leukuma, the daughter of Ludvig and Louise (Opsahl) Olson was born on February 26, 1929, in Stockholm Township, Wright County, Minnesota. Marry was baptized and confirmed in the Christian faith and was presently a member of the Evangelical Covenant Church in Dassel. She attended country school near her home before attending Dassel High School, graduating in 1949. On June 25, 1949, Mary was united in marriage to Alvin Leukuma at the North Crow River Lutheran Church in Knapp, Minnesota. In 1951, they moved to a farm north of Dassel overlooking Big Swan Lake. Together they farmed and raised their two sons, Larry and Bret. They celebrated 54 years of marriage until Alvin’s death on January 24, 2004. She continued to live on the family farm until 2015. Mary worked at the Cokato Hatchery in her early days. She later was employed as a nurse’s aid at both the Cokato Manor and the Lakeside Health Care Center in Dassel. Mary loved the country Life. She also was a fantastic cook, making her Norwegian and Swedish heritage favorites like Lutefisk, potato sausage, and Swedish meatballs. She loved her vegetable gardens and her flower garden. She could swing a mean broom when the livestock would get out and raid her garden’s. In 1994, Mary and Alvin built their dream home out on the hill overlooking Big Swan Lake. Mary loved all Kinds of wildlife, watching Birds at her feeders, pheasant’s, turkeys, and especially white tail deer. She also loved her yellow Labrador retriever named “Jake”. Mary was a member of the Dassel Evangelical Covenant Church. Mary’s family and friends were very important to her. In 2014, Mary faced struggles with Dementia which cause a move to the Heritage Place in Cokato, Minnesota. In November she had a series of strokes which forced her to move into the Cokato Manor until her passing. She is survived by her sons, Larry Leukuma of Willmar, and Bret Leukuma of Dassel, two grandchildren, Danielle and Karry Jo, one sister, Deloris Spalding of Anderson, CA, and a brother, Phillip Olson of Dassel. She is also survived by numerous nieces, nephews and other relatives. She was preceded in death by her husband, Alvin in 2004, her parents, and siblings, Ruben Olson, Carl Olson and Phyllis Moliter.

Mary R. Leukuma, age 90, of Dassel, died Monday, December 23, 2019, at the Cokato Manor. A funeral service will be held on Tuesday, December 31, 2019, at 11:00 a.m. at the Evangelical Covenant Church in Dassel with Pastor Darren Olson officiating.... View Obituary & Service Information

The family of Mary Ruth Leukuma created this Life Tributes page to make it easy to share your memories.

Send flowers to the Leukuma family.