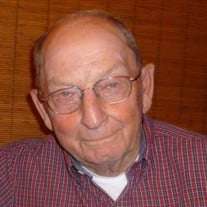 Marvin Loren Beckman, age 89, of Dassel, died Sunday, December 5, 2021, at the Hutchinson Hospital. A memorial service will be held on Friday, December 10, 2021 at 11:00 a.m. at the Evangelical Covenant Church in Dassel with Rev. Keith Carlson and REv. Darren Olson officiating. There will be a time to gather with the family on Thursday evening from 4:00 p.m. to 7:00 p.m. at the Evangelical Covenant Church in Dassel and one hour prior to the service at the church on Friday. In lieu of flowers a donation will be given to the Lake Beauty Bible Camp. Marvin Loren Beckman was born to Gustav and Lillie Beckman on July 2nd, 1932, near Atwater MN, with his grandmother, Johannah Beckman, assisting in his birth as midwife. The Depression years necessitated the family move several times and were finally able to settle on a farm, with Washington Creek winding through it, north of Dassel. Marvin attended Washington Mills country school west of Dassel thru eighth grade and graduated from Dassel High School in 1950. He was confirmed at Dassel Lutheran Church.  He met the love of his life Arlene (Nordstrom) while attending Dassel High School. They married in July of 1952 and soon moved to the farm south of Dassel where Arlene had grown up. It was there they raised their family of one daughter and four sons. In 1994 they built their new home in Dassel. In May of 2021 they moved into the Lakeside Apartments also in Dassel. Marvin had only one vocation – although it was more a way of life. He was a Farmer. Marvin and Arlene, and their children operated a dairy farm of thirty-three Holstein milk cows and 300 acres of cropland. He later partnered with his son Ron and was able to farm into his mid-eighties. The love of the Lord was evident in Marvin’s daily life while caring for family and being devoted to his faith. He and Arlene felt very strongly about stewarding their time, talents and giving in support of the mission of Dassel Covenant Church. The devotions that started while raising their children continued throughout their marriage, ending each day in the Word of God and prayer. Throughout his life Marvin enjoyed sports. He participated in high school football and later played town league baseball and softball. His passion of sports continued as a spectator in later years. He was blessed to watch his children, grandchildren, and even his great-grandchildren participate in numerous sports activities. He also loved to watch sports on TV with Arlene. The MN Twins, Vikings, and Gophers topped their list of favorite teams.  Music filled the air at their home throughout their years together, especially at Christmas with the traditional singing of carols. Although Marvin never had any formal music training, he felt it was important that all his children had the opportunity for piano and other musical training. Listening to his children sing was a highlight for him. Marvin enjoyed his time with family and friends. Laughter filled the room as he would tell stories or jokes. In recent years, his laughter would often overtake him as he tried to complete a story or joke. His humor and teasing will be missed greatly. Most of all, Marvin loved Arlene, his wife of 69 years. Together, they enjoyed traveling extensively in the United States, Sweden and especially their annual trip to Duluth. They also enjoyed hosting Christmas parties and events for church groups, families, and friends. Together they had the gift of hospitality. Marvin is survived by Arlene: daughter Julie (Glenn) Schumann, daughter-in-law Marla, sons Ronald (Rise'), Bradley (Tami), and John (Brenda); 18 grandchildren, 40 great-grandchildren, sisters Margaret Danielson and Dianne Johnson and numerous cousins, nieces and nephews. He was preceded in death by his parents, brother Gustav Jr., sister Jean Petersen, son Richard, and granddaughters, Ria and Bethany.

Marvin Loren Beckman, age 89, of Dassel, died Sunday, December 5, 2021, at the Hutchinson Hospital. A memorial service will be held on Friday, December 10, 2021 at 11:00 a.m. at the Evangelical Covenant Church in Dassel with Rev. Keith Carlson... View Obituary & Service Information

The family of Marvin Loren Beckman created this Life Tributes page to make it easy to share your memories.

Send flowers to the Beckman family.