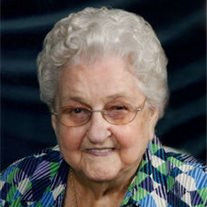 Marlyce Maxine Miller, age 87, of Cokato, formerly of Dassel, died Sunday, January 12, 2014, at the Cokato Manor. A funeral service will be held at 2:00 p.m. on Thursday, January 16, 2014, at the Gethsemane Lutheran Church in Dassel with Rev. Steven Olson officiating. The interment will be held at the Dassel Community Cemetery following the service. A visitation will be held one hour prior to the service on Thursday at the Gethsemane Lutheran Church in Dassel. The Johnson Funeral Home in Dassel is in charge of the funeral arrangements. Marlyce Maxine Miller was born on May 6, 1926, in Cokato to Helmer and Hildegarde (Jatko) Abrahamson. She attended the Ojampera Country School and the Cokato High School. She was confirmed at the Cokato Finnish Apostolic Church. On July 4, 1943, Marlyce was united in marriage to Arthur Harris Miller in Washington. They lived in Washington and California for a short time before moving to Dassel where they bought a farm near Spring Lake and shortly after that they bought the farm where they resided until they entered the Cokato Manor. Besides helping out on the family farm, she also worked as a waitress at the Coffee Cup Café and the Downstairs Café and as a clerk at the Gayner Hardware Store in Dassel. Marlyce enjoyed gardening, swimming, dancing, and watching sports. She was a faithful member of the Gethsemane Lutheran Church in Dassel and served on various ladies groups throughout her years. Marlyce passed away on January 12, 2014, at the Cokato Manor at the age of 87 years, 8 months, and 5 days. She is survived by her husband, Harris, sons, Darrel (Ruth) of Cokato, Steven (Pat) of Dassel, four grandsons, Branden (Anna) of Rochester, Jereme of Dassel, Craig (Jessica) of Hutchinson, and Bo (Stacy) of Hutchinson, six great grandchildren, Lee, Jae, Emily, Riley, Brinley, and Morgan. Marlyce was preceded in death by her parents and a sister, Vivian Leukuma.

Marlyce Maxine Miller, age 87, of Cokato, formerly of Dassel, died Sunday, January 12, 2014, at the Cokato Manor. A funeral service will be held at 2:00 p.m. on Thursday, January 16, 2014, at the Gethsemane Lutheran Church in Dassel with Rev.... View Obituary & Service Information

The family of Marlyce Maxine Miller created this Life Tributes page to make it easy to share your memories.