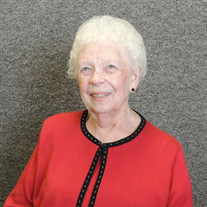 Marjorie Ann Anderson, age 87, of Dassel, died Monday, September 17, 2018, at her residence. A memorial service will be held on Tuesday, September 25, 2018, at 11:00 a.m. at the Evangelical Covenant Church in Dassel with Pastor Darren Olson officiating. The interment of the urn will be held at the Fairview Cemetery in Willmar following the service. There will be a time to gather with the family one hour prior to the service on Tuesday at the Evangelical Covenant Church in Dassel. Marjorie Ann Anderson, the daughter of Edwin and Hazel (VanCampen) Monson, was born on April 7, 1931, near Belview, Minnesota in Kintire Township, Redwood County, Minnesota. Marjorie was baptized and later confirmed in the Christian faith and was presently a member of the Evangelical Covenant Church in Dassel. She graduated from Belview High School and graduated from the North Central Bible College in Minneapolis in 1952. On June 27, 1954, Marjorie was united in marriage to Gordon Olson in an Alaskan Indigenous Native village of Northway in a log cabin. Together Marjorie and Gordon worked as missionaries and made their home in the Minto, Alaska area until 1969, when they moved to Angoon, Alaska. In 1981, Marjorie and Gordon moved back to Willmar, Minnesota, because of Gordon’s health. After the death of Gordon, Marjorie moved to Minneapolis where She was employed as a secretary in the district office for the Secretary of the Assembly of God Church in Minnesota. On May 18, 1996, Marjorie was united in marriage to Lowell Anderson. Together they made their home in Long Prairie for several years before they moved to Dassel. For several years, Marjorie was the Secretary, and Lowell was a caretaker of the Lake Beauty Bible Camp in rural Long Prairie. Marjorie loved to tell stories about her life in Alaska. She had a quiet and private faith, she lived her life serving God and served faithfully wherever she was needed. She loved her family and especially enjoyed spending time with her grandchildren. She enjoyed nature, bird watching, especially cardinals, and she always had gorgeous roses and flowers. She was a talented musician, playing piano and played the clarinet in the North Park College Band. She is survived by her nephew, Jim (Linda) Bartz of Rogers, great-nephew, Sam Bartz, brother-in-law, Bill Bartz of Maple Grove, step-children, Dale (Heidi) Anderson of Brainerd, Brian (Maria) Anderson of Dassel, Cherri Anderson of St. Cloud, Holly (Lee) Nordmeyer of Faribault, Phil (Ann) Anderson of Dassel, Jill (Lloyd) Heaver of Cokato, six grandchildren, Taylor (Ali) Nordmeyer, Conor Nordmeyer, Cammi Nordmeyer, Kiersten Heaver, Mathew Kramer, and Karen Jacobs, one great grandson, Issaac Nordmeyer. She was preceded in death by her husbands, Gordon and Lowell, her parents, and her sister, Marion Bartz.

Marjorie Ann Anderson, age 87, of Dassel, died Monday, September 17, 2018, at her residence. A memorial service will be held on Tuesday, September 25, 2018, at 11:00 a.m. at the Evangelical Covenant Church in Dassel with Pastor Darren Olson... View Obituary & Service Information

The family of Marjorie Ann Anderson created this Life Tributes page to make it easy to share your memories.