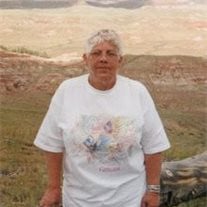 Marian Cathrine (Wimmer) Keppers, age 72, of Dassel, died Friday, May 16, 2014, at the Meeker Memorial Hospital in Litchfield. A memorial service will be held on Wednesday, May 21, 2014, at 10:30 a.m. at the St. John's Catholic Church in Darwin with Fr. Brian Mandel officiating. The interment will be held at the St. John's Catholic Cemetery following the service. A time to gather with family will be held one hour prior to the service at the church on Wednesday morning. Marian Catherine (Wimmer) Keppers, the daughter of Leo and Ludvina (Weber) Wimmer, she was born on June 23, 1941 in Darwin, Minnesota. Marian grew up in the Darwin area and attended school in Dassel and later attended Litchfield High School. On June 25, 1960, Marian was united in marriage to Melvin Keppers at the St. John's Catholic Church in Darwin by Father Fleming. Together they made their home in Saint Paul and later to Maplewood where they raised their children in Maplewood. For the past 23 years they have made their home overlooking Lake Washington. Her husband and family were the most important thing in her life. She was a born caregiver who always thought about others, before she thought about herself. She would always have children around her, being either one of her grandchildren, great grandchild or one of the many nieces, nephews, or child that she would be taking care of. She enjoyed spending time fishing, crocheting, making jewelry, reading and doing puzzles. Marian is survived by her husband, Melvin of Dassel, children, Donald W. (Jenifer) Keppers of Inver Grove Heights, Patti Garding of Darwin, Sharon (Bill) Lindborg of Maplewood, honorary son, Joe Leonard of South St. Paul, four grandchildren, Sarah Keppers, Christopher Keppers, Samantha Keppers, and Shawn Keppers, four great grandchildren, siblings, Pete (Darlene) Wimmer of Dubois, Wyoming, Bill (Linda) Wimmer of Darwin, Frank (Karen) Wimmer of Darwin, Leonard (Karen) Wimmer of Dassel, Tom (Gayle) Wimmer of Dassel, Margie (Frank) Pfel of Baker City, Oregon. She is also survived by several nieces and nephews, great nieces and nephews, and great great nieces and nephews and other relatives and friends. She was preceded in death by her son, Michael, parents, siblings, Lorriane Wilard, Victor, Charles, and Theresa Lanigan, son in law, Ed Garding.

The family of Marian Cathrine (Wimmer) Keppers created this Life Tributes page to make it easy to share your memories.