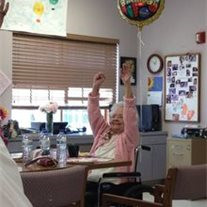 Margaret Marie Nordquist, age 100, of Cokato formerly of Columbia Heights, died Tuesday, November 5, 2013, at Cokato Manor in Cokato. A funeral service will be held on Friday, November 8th, 2013, 2:30 at the First Lutheran Church in Columbia Heights, MN. The interment will be held at Sunset Memorial Park in Minneapolis, MN. There will be a visitation one hour prior to the service at the First Lutheran Church in Columbia Heights. Margaret Marie Nordquist, the daughter of Paul and Clara Maple was born on June 23, 1913, in Hayward, Wisconsin. She grew up in Golden Valley where she attended Oak Grove School. Margaret was baptized and confirmed in the Lutheran faith and was presently a member of the First Lutheran Church in Columbia Heights. She had been active in her church ladies aid organization. On June 23, 1933, Margaret was united in marriage to Stanley Nordquist in Parkers Prairie, Minnesota. After their marriage they lived in Minneapolis and upon Stanley's death Margaret moved to Columbia Heights. For 30 years she was employed by Fanny Farmer on East Hennepin and Dinky Town in Minneapolis. She dearly loved her family, especially her grandchildren and great grandchildren. She loved to bake cookies for her family. At the age of 75 years she climbed the stairs of the IDS Tower for the Cystic Fibrosis Climbathon and when she reached the top said, "is this it ?". She is survived by her children, Jean (Clarence) Sauers of Dassel and Carol Lee Werner of Albertville, six grandchildren, Linda, Cynthia, Donna and Barbara, Kelly and Stan, twelve great grandchildren and three great great grandchildren. She was preceded in death by her husband, Stanley, her parents, and her siblings, Eva Pace, Paul Maple, Bernice Collins, and Robert Maple.

The family of Margaret Marie Nordquist created this Life Tributes page to make it easy to share your memories.

Send flowers to the Nordquist family.