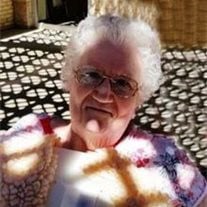 Marcella May Vogelpohl, age 82, of Dassel, died Sunday, June 19, 2016, at the Augustana Lakeside Health Care Center in Dassel. A memorial service will be held on Saturday, June 25, 2016, at 11:00 a.m. at the Johnson Funeral Home in Dassel with the Rev. Keith Carlson officiating at the service. There will be a one hour time to gather with the family prior to the service at the Johnson Funeral Home in Dassel on Saturday. Marcella May Vogelpohl, the daughter of George and Eva (McLaughlin) Johnson, was born on July 8, 1933, in Le Sauk Township, Stearns County, Minnesota. She was baptized and confirmed in the Christian faith. On July 31, 1956, Marcella was united in marriage to Marvin L. Vogelpohl in Hampton, Virginia. Following their marriage they resided in Richmond for several years before moving to Minneapolis. In 1978, Marcella and Marvin moved to Dassel, where she has since resided. Together they celebrated 45 years of marriage and raised seven children. She had a deep love for her family and enjoyed her grandchildren and great grandchildren. She loved holiday and special events that they would get together. She had knitted the mittens, hats and scarfs that her children used when they were young. She loved to crochet and had made many afghan's and dollies over the years. She will be missed by her family and her friends. She is survived by her children, Lloyd (Donna) Vogelpohl of Howard Lake, Lena (Bob) Block of Paynesville, Art Vogelpohl of Cokato, Eva (Robert) Braness of Litchfield, Elaine (Lee) Hawkins of Webster, WI, and Lora Vogelpohl of Hutchinson, 17 grandchildren and 11 great grandchildren, and a sister, Dorothy of Seattle, WA. She was preceded in death by her husband, Marvin on December 1, 2001, her son Allen, on May 25, 2011, one great grandchild, Cheyenne, parents, and four brothers, George Johnson, Wesley Johnson, Art Johnson and Leroy Johnson.

Marcella May Vogelpohl, age 82, of Dassel, died Sunday, June 19, 2016, at the Augustana Lakeside Health Care Center in Dassel. A memorial service will be held on Saturday, June 25, 2016, at 11:00 a.m. at the Johnson Funeral Home in Dassel with... View Obituary & Service Information

The family of Marcella May Vogelpohl created this Life Tributes page to make it easy to share your memories.

Send flowers to the Vogelpohl family.