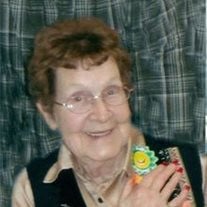 Madrene Delia Peterson, age 85, of Dassel died Wednesday, July 20, 2016, at the Augustana Lakeside Health Care Center in Dassel. A funeral service will be held on Tuesday, July 26th, 2016, at 11:00 a.m. at Gethsemane Lutheran Church in Dassel with the Rev. Dan Belgum-Blad officiating. The interment will be held at the Steelsville Cemetery in rural Dassel following the service. A visitation will be held one hour prior to the service at the Gethsemane Lutheran Church in Dassel. The Johnson Funeral Home in Dassel is in charge of the funeral arrangements. Memorials are preferred to be sent to the Augustana Lakeside Health Care Center of Dassel. Madrene Delia "Fulkerson" Peterson, the daughter of LaRue and Grace (Heitt) Fulkerson, was born on May 1, 1931, in Mora, Minnesota. Madrene grew up in the Mora area and had attended the Mora High School. Madrene was baptized and later confirmed in the Christian faith and was presently a member of the Gethsemane Lutheran Church in Dassel. In October of 1951, Madrene was united in marriage to Clifford Ramgren in Mora, Minnesota. Together they made their home in Dassel for a few years before moving to Minneapolis. In 1961, Madrene and Clifford moved back to Dassel. On March 13, 1979, Madrene was united in marriage to Bernard "Bernie" Franklin Peterson at the Gethsemane Lutheran Church in Dassel. Together they made their home in Dassel. She had been employed for several years at the Dassel Bakery and had worked for the majority of her career at the Dassel Dispatch and Enterprise Dispatch. Madrene loved to play Boggle, Bingo, cards, and shake dice with her family and friends. She and Bernie loved to travel and had gone to Hawaii, Tucson, Arizona to visit Bud and Shirley, Florida to visit Dale and Della, Branson, Missouri, and California to visit relatives. Holidays were a special time for her and she enjoyed getting together with her family and friends. She always had time for her family and often had taken care of her grandchildren when they were younger. Madrene will be deeply missed by her family and friends. She is survived by her, son, Scott (Jackie) Ramgren of Hutchinson, step-children, Lee (Bernadette) Peterson of Darwin, and Lynn (Patrick) Noack of Eden Prairie, nine grandchildren, Jennifer Ramgren, Mitchell Ramgren, Erik Ramgren, Benjamin Ramgren, Shannon O'Fallon, Leah Schroer, Andrea Meyer, Andrew Nagorski, and Laura Nagorski; twelve great grandchildren, and siblings, Shirley (Alfred "Bud") Locher of Green Isle, Elma McCoy of Watsonville, CA, James (Lorie) Fulkerson of Wilmington, South Carolina, and Sheldon (Sharon) Fulkerson of Grasston, MN. She is also survived by sisters-in-law, Della Fulkerson of Largo, Florida, and Gwendolyn Fulkerson of Stewart and many nieces and nephews. She was preceded in death by her husbands, Clifford Ramgren and Bernard "Bernie" Peterson, great granddaughter, Lilly Howard, parents, and siblings, Ivan "Dale", Genny, Ramona, Florence, Wayne and Robert.

The family of Madrene Delia Peterson created this Life Tributes page to make it easy to share your memories.