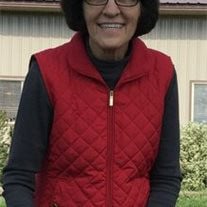 LuAnn Ethel Anderson, age 73, passed away peacefully at her home in Dassel, on Thursday, March 22, 2018. LuAnn was the daughter of William and Ethel (Lewerenz) Seefeldt. She was born on April 19, 1944, in Hutchinson, Minnesota. She was baptized and later confirmed in the Christian faith. She was a life-long member of the Gethsemane Lutheran Church in Dassel, where she served as a Sunday School and Bible School teacher. She served on the library board and in the office. LuAnn attended school in Dassel and graduated in 1962. After graduation, she began working at the Carlson Companies and later worked for the Meeker County Extension Office for 16 years. On April 16, 1966, LuAnn was united in marriage to her high school sweetheart, Orville Anderson, at the Peace Lutheran Church in Hutchinson. Their first home was in Minneapolis until they moved back to Dassel in 1973. Dassel was where their hearts belonged and where they created their life together. They started out small and accomplished their dream building a farm and successful business together. LuAnn supported Orville in every way she could for 52 years. She made him breakfast every morning, brought lunches to the fields and was very involved the day to day operations and decision making. In 1975, LuAnn became a mother to her beautiful baby girl, Lisa. Lisa was her greatest joy and accomplishment. She gave her whole heart into raising her and giving her everything she had. They have always had a special and close relationship, and LuAnn never missed an opportunity to support Lisa in all her dreams. Lisa will deeply miss her and their daily phone calls. LuAnn loved her family fiercely and was an exceptional grandma to Carsen (11) and Avery (9) Carter. They loved spending time with her. She always brought them on special adventures, volunteered in their classrooms, had the refrigerator stocked with their favorite treats, and mailed them packages to show them just how much they were loved. One of her greatest attributes was being a great listener, and she always listened to their stories for hours. Gardening, reading, enjoying movies, and traveling with Orville were LuAnn's favorite things to do. They spent many winters in Arizona with family and friends. Fox News lost their biggest fan, and we lost an extraordinary woman. All of her family and friends will deeply miss her. She is survived by her husband, Orville Anderson of Dassel, daughter, Lisa, (Erik) Carter of Queen Creek, Arizona, two grandchildren, Carsen Carter and Avery Carter, siblings, Lois (Dale) Werner of Battle Lake, Linda (Ron) Evans of Florida, Ron (Wendy) Seefeldt of Dassel and a sister in law, Jan Seefeldt of Hutchinson. She was preceded in death by her parents, her brother, William Seefeldt Jr., and her sister, Laura Servin. There will be an 11:00 a.m. funeral service on Wednesday, March 28, 2018, at Gethsemane Lutheran Church in Dassel with Rev. Laurie O'Shea officiating. The interment will be held at the Swan Lake Lutheran Cemetery in rural Dassel. A visitation will be held on Tuesday evening from 4:00 p.m. to 7:00 p.m. at the Johnson Funeral Home in Dassel, with a one-hour visitation before the service at the Gethsemane Lutheran Church in Dassel.

LuAnn Ethel Anderson, age 73, passed away peacefully at her home in Dassel, on Thursday, March 22, 2018. LuAnn was the daughter of William and Ethel (Lewerenz) Seefeldt. She was born on April 19, 1944, in Hutchinson, Minnesota. She was baptized... View Obituary & Service Information

The family of LuAnn Ethel Anderson created this Life Tributes page to make it easy to share your memories.

LuAnn Ethel Anderson, age 73, passed away peacefully at her home...