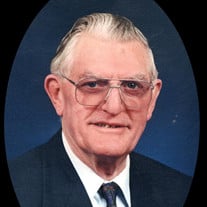 Lowell Burton Gillman, age 89, of Cokato, died Saturday, January 11, 2020, at his residence. A funeral service will be held on Monday, January 20, 2020, at 2:00 p.m. at the Johnson Funeral Home Chapel in Dassel. The interment will be held at the Dassel Community Cemetery following the service. There will be a one-hour visitation prior to the service on Monday at the Johnson Funeral Home in Dassel. Lowell Burton Gillman, the son of Claude and Katherine (Wessels) Gillman, was born on November 13, 1930, in Dassel, Minnesota. Lowell grew up in Dassel until 1935, when the family moved to Litchfield. In 1944, the family moved back to Dassel. Lowell attended District #48 up until 8th grade and graduated from the Dassel High School in 1947. In 1948, Lowell moved to Cokato. Lowell was baptized at his grandparents’ home in Lamson and was confirmed at the Spring Grove Methodist Church near Corvuso. He had been an active member of the Walker United Methodist Church. He had served as a chairman of the Church Board, ushered, and was very involved in every aspect of the church. On May 23, 1952, Lowell was united in marriage to Sadie Caroline Compton at the Zion Lutheran Church in Litchfield. Together they made their home in Cokato. Lowell was employed as a Service and Parts Manager for Holt Motors in Cokato for 54 years. Lowell also worked on the family farm helping his father and son. He enjoyed spending time doing field work and tinkering on the tractors as well as woodworking. Lowell was a hard-working, humble and kind man and a dedicated husband and father. Lowell enjoyed spending time with his family. He was proud of his children, grandchildren and great grandchildren. He loved getting together for holidays and special events. He was always willing to lend a hand from helping his son and dad with farm chores or fixing farm equipment to helping with projects for friends and family. He liked to travel taking trips with family to Texas, Vegas, Tennessee, Mexico and Puerto Rico. He especially loved when people would come and visit and have a cup of coffee with him. He is survived by his children, LuAnn (Thomas) Ollig of Winsted, Debbie (Denny) Johnson of Cokato, Bonnie (Dwight) Hatfield of Cokato, Stephen (Tammy) Gillman of Rockford, Stephanie (Boyd) Birdsill of Spooner, WI; grandchildren, Aric Johnson, Tina Joiner, Michelle Campbell, Lisa Grack, Chad Hatfield, Beth Ollig, Laura Root, Breanna Kresser, Sarah Gillman, Zachary Beise, Luke Birdsill, Abigail Birdsill, Alyssa Gillman, and Cody Gillman; great grandchildren, Kayla Grack, Brandon Johnson, Dylan Grack, Jade Hatfield, Hunter Hatfield, Tyler Johnson, Madison Campbell, Owen Johnson, Cole Johnson, Evan Grack, Jordan Grack, Grayson Root and Hadley Kresser. He is also survived by his siblings Marvel (Donald) Blom of Hutchinson, Marcia (Floyd) Anderson of Apple Valley, Mary (Harlund) Carlen of Dassel, and Irene Krejci of Hutchinson, sisters-in-law, Esther Klima of Cokato, Judy Compton of Eagan, and Lota Compton of Oklahoma. He was preceded in death by his wife, Sadie, parents, Claude and Katherine Gillman, brothers-in-law, Richard Krejci, Cyrus Weispfennig and father and mother in-law, Edmond and Esther Compton.

Lowell Burton Gillman, age 89, of Cokato, died Saturday, January 11, 2020, at his residence. A funeral service will be held on Monday, January 20, 2020, at 2:00 p.m. at the Johnson Funeral Home Chapel in Dassel. The interment will be held... View Obituary & Service Information

The family of Lowell Burton Gillman created this Life Tributes page to make it easy to share your memories.

Send flowers to the Gillman family.