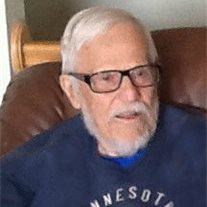 Lowell, "Butch," Engelbrekt, age 85, died Monday, December 18, 2017 at his Dassel home with his wife of 62 years at his side. A memorial service will be held Saturday, December 23rd, 10:30 a.m., at Dassel Covenant Church with Rev. Keith Carlson and Rev. Dan Thompson officiating. There will be a time to gather with family and friends on Friday, December 22, 4 - 7 p.m., and one hour prior to the service on Saturday. The Johnson Kelly American Legion Post #483 will provide Military Honors. Lowell "Butch" Engelbrekt was born to Gustaf and Hulda (Anderson) Engelbrekt on December 27, 1931 in Minneapolis, MN. He graduated from Minnehaha Academy in Minneapolis in 1950, and began a 42-year career with Sears on Lake Street in Minneapolis, interrupted by a 2-year stint in the US Army during the Korean Conflict. Butch was baptized and confirmed in the Christian faith and was most currently a member of the Evangelical Covenant Church in Dassel. Butch married Betty Ann Olson on November 26, 1955, and together they made their home in Richfield, MN, for 35 years where they raised five children and worshiped and were active at Bethany Covenant Church. In 1992 Butch and Betty relocated to Dassel, MN and in 1995 they built a home on the Engelbrekt Century Farm, north of Dassel. Butch enjoyed fishing, hunting, skiing, snowmobiling and many, many creative hobbies - taxidermy, picture-framing, stained-glass. But perhaps his favorite activity was building. He built his cabin and his home and participated in many other projects, at Forest City Stockade, Lake Arvilla Cemetery, the Dassel Historical Society, at church and for others. Butch and Betty spent 18 winters in Harlingen, TX. Butch had many friends and family that he loved deeply. He is survived by his wife, Betty Engelbrekt, of Dassel, children, Brent (Sherri) Engelbrekt of St. Cloud, Brenda (Mark) Bonney of Woodbury, Brad Engelbrekt of Chisago, Brian (Wendy) Engelbrekt of Spicer, Blair (Martha) Engelbrekt of Eden Prairie, eleven grandchildren, thirteen great grandchildren, and a sister, Ruth Marie Hultquist of Bloomington. He was preceded in death by his grandson, Alex Engelbrekt, his parents and a brother, James Engelbrekt.

Lowell, "Butch," Engelbrekt, age 85, died Monday, December 18, 2017 at his Dassel home with his wife of 62 years at his side. A memorial service will be held Saturday, December 23rd, 10:30 a.m., at Dassel Covenant Church with Rev. Keith Carlson... View Obituary & Service Information

The family of Lowell "Butch" Engelbrekt created this Life Tributes page to make it easy to share your memories.

Send flowers to the Engelbrekt family.