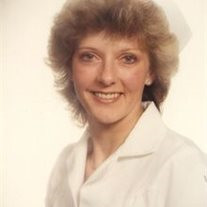 Lori Fae Rogers, age 67, of Dassel, (formerly of Howard Lake), died Tuesday, December 30, 2014, at her home. A funeral service will be held on Saturday, January 3, 2015, at 2:00 p.m. at the Johnson Funeral Home in Dassel with the Rev. Dan Swanson officiating. A visitation will be held on hour prior to the service at the Johnson Funeral Home in Dassel. There will be an interment in the spring at Bloomskog Cemetery in Moose Lake, Minnesota. Lori Fae Rogers, the daughter of Charles and LuAnn (Brown) Rogers was born on June 27, 1947, in Carlton, Minnesota. She grew up in the Cloquet, Minnesota area and received her G.E. D. and later received her License Practical Nurse degree from Lake Superior College in Duluth. Lori was a caring person and loved taking care of others; she had been employed at Park Nicollet Hospital in St. Louis Park for 15 years and later taught Medical Assistance at the College of St. Scholastica in Duluth for several years. On September 25, 1991, Lori was united in marriage to Arvid Kull. Together they made their home in Minnetonka before they moved to a farmstead south of Howard Lake where they had lived until 2004, when they moved to their home overlooking Spring Lake in Dassel. Lori enjoyed antiquing, furniture restoration, and getting out in the garden to take care of her flowers, especially her dahlias. She was a loving and active person and would help at her church as much as she could. Lori was baptized in 2007, by Rev. Swanson at the Cokato Baptist Church. Lori will truly be missed by her family and friends. She is survived by her husband, Arvid Kull of Dassel, step-son, Gary Kull of Minnetonka, daughter, Jackie (Ken) Underhill of Maple Lake, three grandchildren, Nickolus, Alexander, and Zackary Underhill, siblings, David Rogers (his significant other, Linda), of Juno, Alaska; Diane Mayorga of Pewaukee, Wisconsin, Danny (Nancy) Rogers, of Cloquet, Cheryl (Jeff) Ballou of Barnum, Betsy (Phil) Danielson of White Bear Lake, Carol Steel and (her significant other, Gary Wierke) of Woodbury, Kathy (Doug) Jones of Moose Lake. She is also survived by several nieces, nephews, and other relatives. She was preceded in death by her mother, LuAnn Dunbar, father, Charles Rogers, and a half-sister, Tammy Dunbar.

The family of Lori Fae Rogers created this Life Tributes page to make it easy to share your memories.

Send flowers to the Rogers family.